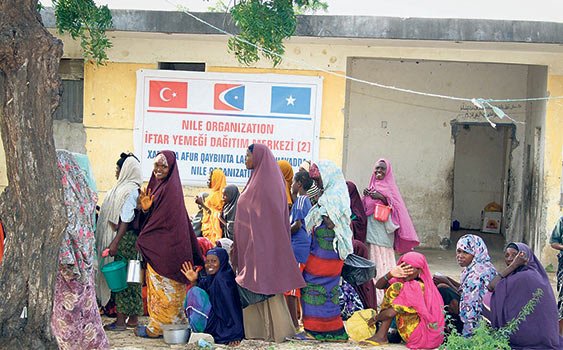 Ramadan, the sultan of the 11 months, is the period of time where most aids and charities are done. Philanthropists are helping both domestic and  international muslims, making this month fertile for muslims.

Nil Organization which provides education, health and humanitarian assistance in Somalia, is working hard to make Somalians happy this Ramadan too. There will be aids to thousands of people living in tent camps again this Ramadan. In Somalia, Turkish schools and “Kimse Yok mu” will be providing iftar and sahur meal to 5000 people and distributing 6000 lunch boxes to families.

Kimse Yok Mu overseas donations coordinator Yusuf Yildirim, stated that they are acting on the philosophy of “teaching a man to fish, instead of giving a man a fish”, and they have started to build lasting projects in Somalia, like schools, hospitals and dormitories.  He added that “After tragic events in Somalia, our presence here continued to grow with the help of our bold nation.  Our personnel in the region and volunteers, supported hundreds of thousands of Somalis with food, clothes, medicine, blankets and tents.