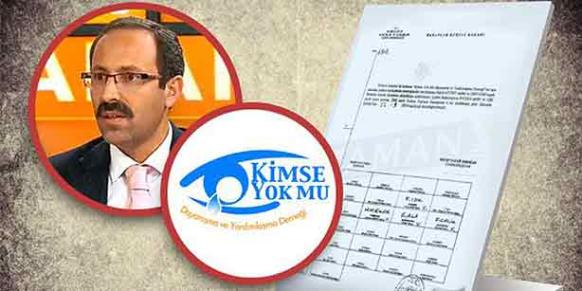 Boğaziçi Lawyers' Association President Bilal Çalışır says there was no signature on the copy of the Cabinet decision sent to the Kimse Yok Mu. (Collage: Today's Zaman)

According to Boğaziçi Lawyers’ Association President Bilal Çalışır, it is obvious that the decision to revoke Kimse Yok Mu’s right to collect donations is irregular and arbitrary, as there is no justification for the decision.

Çalışır stated that the charity organization was given permission to collect donations after it acquired public interest status with a Cabinet decision in 2007. A Cabinet decision is necessary to revoke this status.

Çalışır noted that it is not certain whether the decision was made unanimously or by a majority vote, as the copy sent to Kimse Yok Mu was unsigned. Çalışır also recalled what Deputy Prime Minister Bülent Arınç stated regarding the decision to ban Kimse Yok Mu from collecting donations. Arınç had said that the decision did not come to the ministers to be signed.

Çalışır stated that they have not yet learned for sure whether there is a signed copy of the decision.

İsmail Cingöz, the president of Kimse Yok Mu, announced the Cabinet decision via his official Twitter account on Thursday. Kimse Yok Mu will no longer be able to collect donations from the public.

Erdoğmuş said that he was shocked and frightened after learning about the Cabinet decision regarding Kimse Yok Mu.

“[The government] has now started to mock our sensitivity. This pressure and tyranny will come to an end one day. It is not possible to escape divine retribution,” he said.
Erdoğmuş added: “This decision, which has been made based on no testimony or evidence and is completely arbitrary, I evaluate as nothing more than revenge. [This] saddens and worries us all.”

He also stated that no person with a conscience could make such a decision on the eve of the Eid al-Adha holiday, a period when collected donations will be distributed to oppressed, orphaned and victimized people living in various parts of the world. “Neither the conscience of a Muslim nor the conscience of any other person accepts this,” Erdoğmuş stated.