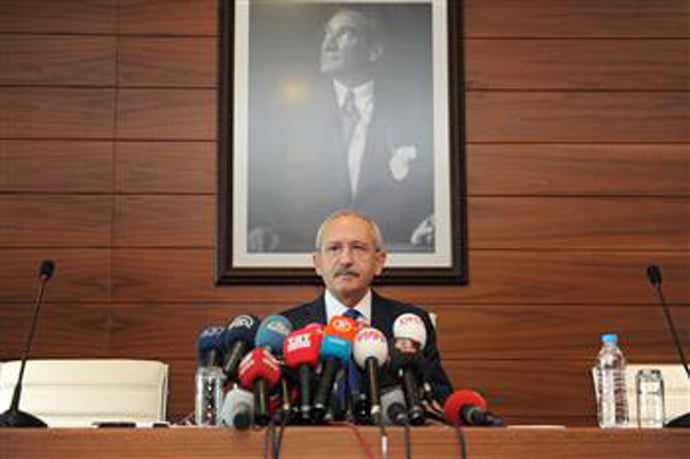 The document released this week by daily Taraf deepened the row between the Hizmet (Service) movement founded by the Islamic scholar Fethullah Gülen and the ruling Justice and Development Party (AKP) over a draft bill set to scrap test prep schools, known as dershanes.

“That document released shows how the AKP keeps a foot in both camps. Someone can show up and say ‘I signed it but I don’t know what it was.’ So I am waiting Mr. Erdoğan to speak on this issue, why he signed the document and if he signed after reading it,” Kılıçdaroğlu told reporters in Ankara before his departure to the United States where he is expected to hold four days of meetings with officials, members of the Congress and think tanks.

“The fact that Erdoğan has [avoided] speaking on such an important matter proves his culpability,” Kılıçdaroğlu argued, accusing the government of hypocrisy.

Kılıçdaroğlu also noted that the retired generals convicted under the Ergenekon and Balyoz (Sledgehammer) trials were sentenced after investigation launched upon the release of similar documents.

Kılıçdaroğlu said that the CHP could give its support to the government’s bill on education on the condition that it intended to carry out a comprehensive change that would remove the necessity of having the dershanes. However, he pointed to the fact that over 100,000 people made their living from such institutions and said their priority would be for these people to keep their jobs.