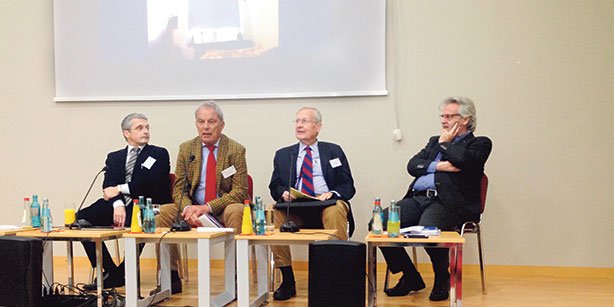 Many academics and journalists attended the symposium held in Germany.(Photo: Today's Zaman)

The two-day symposium, organized jointly by the Dialog and Education Association (SDB) and the German Dialog Institutes Union in Frankfurt, was attended by various academics, journalists, scholars and opinion leaders from a number of countries.

Speaking at the symposium, Hermann stated Gülen views democracy as the first condition for the development of a society.

“He [Gülen] respects rules and always states that problems need to be resolved through peaceful means. He also defends freedom of faith and minority rights. In that sense, the movement draws a distinctive approach to the problems. For instance, they care about education. I personally saw the high quality of the Turkish schools opened by Turkish entrepreneurs linked to the movement,” Hermann stated.

Gülen is highly respected both in Turkey and in many countries around the world for the educational activities he has pioneered along with his efforts to promote intercultural and interfaith activities around the globe. He is in self-imposed exile in the US, although there is no legal hurdle that prevents him from returning to Turkey. Shortly after he went to the US in 2000, he was charged with establishing an illegal organization in Turkey, but was eventually acquitted in 2008.

Gerber meanwhile spoke about the political pressure that the movement faces in Turkey, saying that almost all civil society organizations in history faced similar oppression. “The Hizmet movement is going through a process that many other cicil society organizations experienced before. But this movement has the great potential to serve as a bridge between seculars and religious groups in the world and in Europe in particular,” Gerber stated.

The Turkish government declared the Hizmet movement a treasonous enemy after a corruption scandal involving people in his inner circle that erupted with a wave of detentions on Dec. 17, 2013. Erdoğan openly declared last year that he would do whatever it takes to eliminate the “parallel structure,” a term he invented to refer to alleged sympathizers of the movement within the state bureaucracy, even if this requires a “witch-hunt.”

As part of his smear campaign, Erdoğan, on a tour of several African countries in January, called on African leaders to close down Turkish schools affiliated with the Gülen movement in Africa. During his visit to Ethiopia, he said, “In the countries we visit, we have been talking about the status of these schools and saying they should be closed.” Erdoğan also said he has been telling African authorities that the Turkish Ministry of Education is ready to offer the same service provided by these schools. “The ministry is close to finishing its preparations to that effect,” he said.