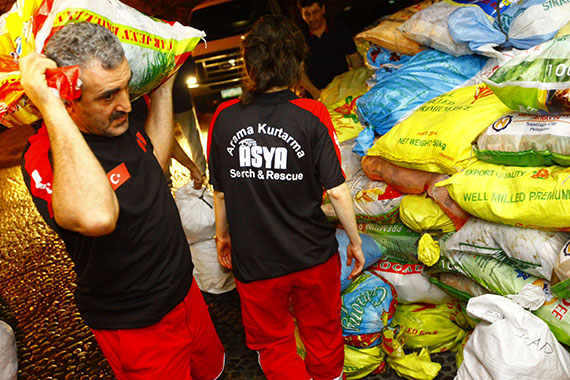 Turkish charity Kimse Yok Mu (Is Anybody There) was the first such organization from Turkey to send aid to the Philippines, which is struggling to recover after being hit on Friday by Typhoon Haiyan.

Reaching the area with military helicopters, a team of 10 people began search and rescue activities and 25 tons of food packages were distributed to 6,500 victims in cooperation with Philippine officials.

An Airbus cargo plane loaded with tents, blankets, kitchen utensils and other aid items provided by the Turkish Red Crescent was also sent to the Philippines through the coordination of the Prime Ministry’s Disaster and Emergency Management Directorate (AFAD).

“Aid from the Turkish people reached the Philippines via our foundation and with the cooperation of Philippine military helicopters, it is being distributed to disaster victims,” said İsmail Büyükay, the leader of the team in the Philippines.

He also noted that the region is in a worse situation than seen on television, as many roads are closed and there is no way to reach certain districts.

“We will continue to deliver our aid to victims in coordination with officials from the Philippines on a daily basis. However, after the emergency aid, there has to be a permanent supply of aid.

Many survivors of the disaster have not only lost their loved ones, but also all they had. In addition to a lack of drinking water, food, medicine and shelter are scarce. Dead bodies have been left to rot in the fields or at the sides of roads, which is increasing the risk of disease.

Prime Minister Recep Tayyip Erdoğan has sent a telegram to President Benigno Aquino III, offering his condolences and pledging to deliver support and aid to the disaster-stricken country.

Philippine officials have projected the death toll will climb even higher when emergency crews reach areas cut off by flooding and landslides. Even for the disaster-prone Philippines, which regularly contends with earthquakes, volcanoes and tropical cyclones, Typhoon Haiyan appears to be the deadliest natural disaster on record. Weather officials said Haiyan had sustained winds of 235 kph (147 mph) with gusts of 275 kph (170 mph) when it made landfall.

The death toll is estimated to be around 10,000 people in the Philippines with the most affected city being Tacloban.

As Kimse Yok Mu continues to distribute aid in the Philippines, Turkish Islamic scholar Fethullah Gülen donated $10,000 to the foundation for victims of the disaster.

Kimse Yok Mu General Director İsmail Cingöz stated that the foundation will deliver $1 million worth of aid to the Philippines. “We hope that this figure will increase with the help of the Turkish people,” he noted.

“According to the United Nations Office for the Coordination of Humanitarian Affairs [UNOCHA], 4.3 million people have been affected by the typhoon and 330,000 people are now homeless. Ninety percent of the houses in Tacloban city have been damaged,” AFAD stated recently.