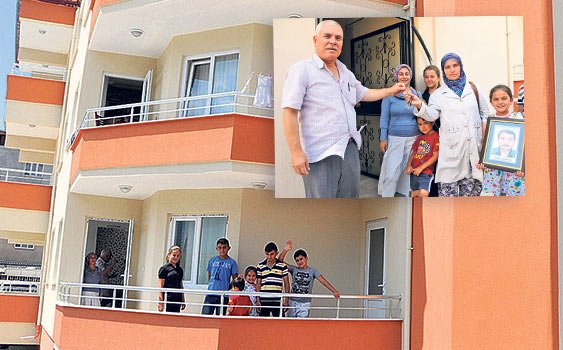 The Turkish charity Kimse Yok Mu (Is Anybody There) has financed the purchase of houses for the families of 11 miners who were among 301 killed in a mining disaster in the district of Soma in western Manisa province in May.

On May 13 Turkey was shocked by an explosion and fire at a coal mine that killed 301 workers and injured scores of others. A fire that started in the mine rapidly depleted oxygen in the shaft, causing the deaths of the miners from carbon monoxide poisoning. The cause of the fire is not yet clear. The incident was the worst mining disaster in the history of the Turkish Republic.

Kimse Yok Mu, which immediately launched efforts to extend a helping hand to the survivors of the tragedy and the families of the victims, has purchased six houses in the center of Soma, three in İzmir’s Kınık district and two in Balıkesir’s district of Savaştepe.

The charity also furnished the houses, spending TL 6,000 on each.

The head of Kimse Yok Mu’s Manisa branch, Abdurrahman Avınç, told Today’s Zaman that families of the miners have already moved into their new houses.

He said the charity would soon deliver two sofas to 30 miners’ families.

Noting that the organization has stepped up its aid efforts during the Muslim holy month of Ramadan, Avınç said 2,500 food packages have been delivered to families in need in Manisa and its districts during the month.

“We did not forget Soma, either. We delivered 200 food packages to the families in need there,” he said, adding that Kimse Yok Mu is doing its best to take various kinds of aid to families affected by the mine disaster in Soma.