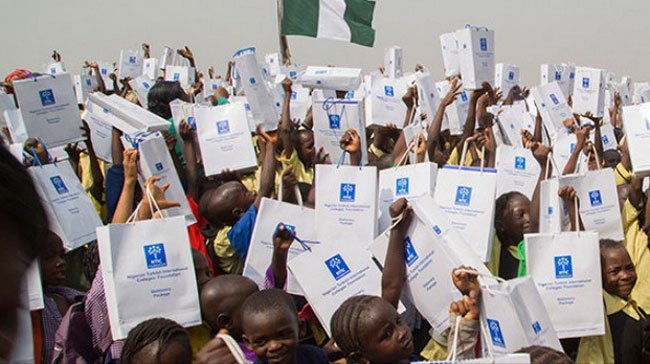 The First Surat Group is the parent organisation of the Nigerian Turkish International Colleges (NTIC). These institutions have been operating in Nigeria for almost two decades. For those who have heard of the famous Turkish schools, this piece of history is hardly news item. What would however surprise most people is that Turkish International Schools is heavily involved in social projects that cater exclusively to the less privileged with absolutely zero profit consideration. I for one was genuinely surprised to hear for the first time that this seemingly elitist institution has a soft side that reads more like full-time welfare project.

With ongoing social intervention projects in health, education, water and sanitation, orphanages, even religious events, one might begin to imagine that the social services, and not its consortium, were its core concern. For its social programmes, NTIC has set up the Nigerian Turkish International Colleges Foundation (NTICF) which caters for a myriad of needs and social deprivations in the society.

The project revolve around initiatives designed to heal the sick, feed the hungry, provide succour for the fatherless and the motherless, protect entire communities against preventable diseases provide nutritional support for destitute households among others. Obviously aware or the yawning gap in health care services in the country particularly for the less privileged, the NTICF has embarked on free medical services, providing world class medical screening, treatment and even surgeries to those who can least afford it.

This initiative included about 100 indigent beneficiaries whose eyesight has been restored through it cataract removal programme in collaboration with the prestigious Turkish Nizamye Hospital. Ten times more beneficiaries are being targeted. But the focus is not just on diagnostic or curative medicine. Prevention also forms its health programme.

The Foundation’s clean water project across the country aims to protect millions of children who are especially vulnerable to the more than 30 waterborne diseases which afflicts populations in the developing world. The World Health Organisation estimates that about 4 million people die from waterborne diseases every year. On its motivation for the clean water project, Fetullah Celik, the director off the NTIC foundation says “We realised that about 50% of Nigerians do not have access to portable water. As a CSR strategy we plan to construct 100 boreholes every year across the country”.

The Foundation’s orphanage project is not just about the customary visitation with one-off donation of relief items. The foundation, apart from renovating orphanages to make them conducive enough to serve as ‘substitute home’s for the kids; it also has a long term programme of scholarship, health and recreational support for the orphans.

Remarkably, its education support programme for the general population include not only scholarships to thousands of indigent Nigerian youths, but it is doing so by putting its world class educational facilities at the disposal of those who would ordinarily not stand a chance at affording the Nigerian Turkish International Colleges. The philosophy behind this project is what really captures its significance. According to Mr. Celik, the “ultimate goal is to raise or nurture a golden generation of Nigerians”.

Not content with giving opportunity to the less-privileged through its own facilities, the foundation has extended its intervention to cover other beneficiaries who cannot practically be accommodated in its own educational facilities. In this regard, NTICF provides supports to tens of thousands of Nigerians in public schools through the supply of classroom facilities as well as study materials for individual students.

In its commitment to the social change philosophy, there appear to be no boundaries. NTICF’s nutritional support programme has distributed food including meat and dairy products, which are normally beyond the reach of the poor, to hundreds of thousands of the needy every year. The Foundation says its desire is that this endeavour “will continue forever”.

It would be stating the very obvious to say that these initiatives are part of NTICF’s Corporate Social Responsibility programme. “Part of the idea behind establishing the foundation is giving back to the society”, says Mr. Celik. But it would seem, from the complexion of its core business interests, that human services are its primary rather than a CSR concern. The First Surat Group for instance has its corporate interests concentrated in the human serverie’ sector – the NTIC, the Nile University, the Nizamiye Hospital, etc.

But whether or not the NTIC in particular or the Surat Group in general formally adopts welfarism as it guiding philosophy, it is clear from its social agenda that for the group, Nigeria, its host country, is not just a market; it is a community.