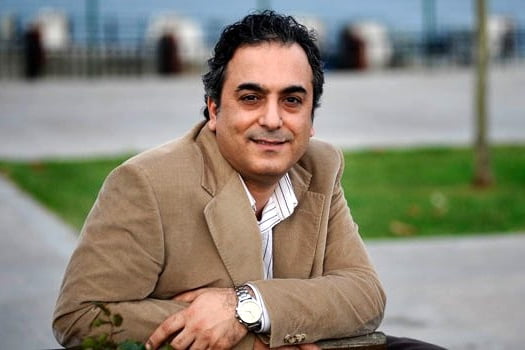 On Tuesday night I joined a fast-breaking dinner at the invitation of the Foundation of Journalists and Writers. We, a large group of friends, started having our soup with the recital of the azan.

What he or she is actually doing is surviving; he or she is not eating for pleasure or fun like many of us do.

Eating is the most essential part of human life. I see an honorable man out there, deserving that bread and the food on his table because of hard labor.

When I was a kid, there was a store selling construction materials next to my dad’s store. Laborers from the Black Sea and the southeast region used to work there for minimum wage. They were working the whole day, carrying cement bags and living in crappy places.

I used to go see them a lot. Something used to call me to go there; and they loved me; one of them was from Bitlis. One day, while eating his bread, the food was covered with blood. He did not care; but I was really terrified.

Then I got it; he was desperate, and he knew it; he was accepting of his fate; he had no money. He died a few months later; he had lung cancer.

We were a financially well-off family. Some nights, we used to go out to have fun in taverns where the famous stars of the time used to take the stage. And there were gypsy women selling roses in these places; on that night, one of these ladies approached my dad; he was buying a rose for my mom. They were negotiating on the price; at that moment, I noticed something behind her.

I saw the wild eyes of a girl of my age. She was looking at me as if she was accusing me. We were living in different worlds. Her look was asking me the reason for this difference. Of course, I was not able to understand this so clearly. But as a child, I felt her rage and rebellion and was touched by this unjust difference.

At the fast-breaking dinner, a message by Fethullah Gülen was read to the audience. He is one of those who have been unjustly separated from their homeland. He, in his message, referred to the famines in Somalia and other parts of the African continent, adding that the Ramadan mood was not so joyous this year because of the ongoing tragedy there. He praised the awareness in our country, calling all to join the aid campaign.

Greek Patriarch Bartholomew also noted that the world’s resources are enough for all to sustain a life that is humane. We have created a world where the richest 200 families hold revenues greater than the incomes of the poorest 3 billion people.

We all have done this. There is no need to blame others for this. If poverty has become like a profession in existence from the very beginning of time, we all are to blame for this.

Africa is like the conscience of this world; that an African child suffers from famine and its horrible repercussions on his body is the shame of all. Our humanity is dying as he dies. We have to make sure that they stay alive; we have to do this to save our humanity.

Ramadan provides a good opportunity; it is observed in the entire world. Fasting enables you to take a look at the most essential act in life. We live on food taken into our body. When we restrict it, we take a look at our hearts which bear noble sentiments but also evil seeds that created the famine in Africa. Fasting enables us to get rid of these evil seeds, offering a golden opportunity to us.

A famous proverb says everybody is born, but not everybody really lives. Yes, we all are born, but life does not mean anything unless we break out of our shells. It is us who would break that shell. Fasting, for this reason, is a good opportunity to start becoming human again by breaking the shells.

Whoever starts becoming a human cannot stay indifferent to injustice. He or she shares his love, his last piece of food; this is the least he does. The poor are the largest nation in this world. They are right there; we have no excuse.

Asked to summarize God’s orders, Jesus said all divine laws were presented in two commands: Love God with all your heart, and love your neighbor as you love yourself.

One of these is the Creator; and the other one is your neighbor next door — your human brother.

And you are the third one… But where are you? Aren’t you there? If not, why?

I wish you a blessed Ramadan.