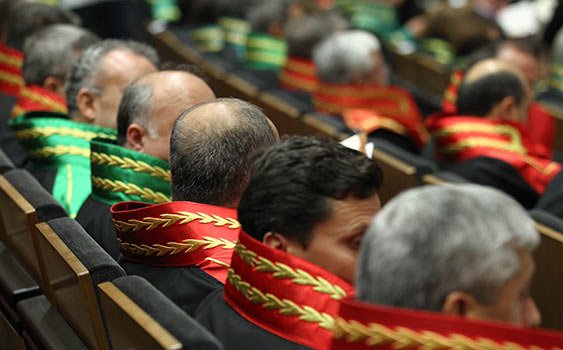 A judge who was recently appointed to a counterterrorism court in the eastern city of Van has been revealed to be a strong supporter of Prime Minister Recep Tayyip Erdoğan.Judge Yusuf Şahin, who was appointed to the Van Counterterrorism Court in April, shared a photo of the prime minister on Facebook with the tag “Liderlerin lideri Erdoğan” (Erdoğan, leader of all leaders). The judge also posted comments on Facebook praising the prime minister and the ruling Justice and Development Party (AK Party) and leveling strong criticism at Turkish Islamic scholar Fethullah Gülen, the inspiration behind the faith-based Hizmet movement, which works in the fields of education, charity and outreach.The discovery of Judge Şahin’s strong support for the prime minister comes shortly after a statement by Supreme Board of Judges and Prosecutors (HSYK) 1st Chamber President İbrahim Okur, who told the media last week that his board was wrong to appoint some controversial figures to the newly established penal courts of peace in İstanbul.The 1st Chamber of the HSYK, the composition of which was redesigned by the government following a corruption operation on Dec. 17, has already appointed 110 penal judges of peace across Turkey, six of whom will serve in İstanbul.Okur confessed to having made mistakes in the appointment of the six penal judges of peace appointed to İstanbul. Some of the six made a number of controversial decisions in the fallout of the Dec. 17 corruption and bribery operation, as part of which over 50 people — including the sons of several then-Cabinet ministers, businessmen and bureaucrats — were detained.“We knew that Hulusi Pur [who was appointed to the İstanbul 2nd Penal Court of Peace] decided to release six people who had been arrested as part of the Dec. 17 [corruption] investigation. If we had known that the three other judges had made decisions in favor of the [corruption] suspects, the picture might be different now. We made a mistake,” Okur told the Hürriyet daily on July 25.One of the three judges Okur referred to is İslam Çiçek, who recently ruled to arrest 31 police officers as part of a government-backed operation against the police force. Çiçek came to prominence in early March when he was also found to be a staunch supporter of Prime Minister Erdoğan, with the judge’s Facebook profile raising suspicions over his objectivity. Çiçek “liked” a Facebook page created by a pro-Erdoğan group titled “Allah uzun ömür versin Uzun Adam” (May God grant you a long life, Tall Man). The moniker “Uzun Adam” (Tall Man) is often used to refer to Erdoğan by his supporters.Soon after Çiçek’s profile was highlighted in media reports, he closed his Facebook account.