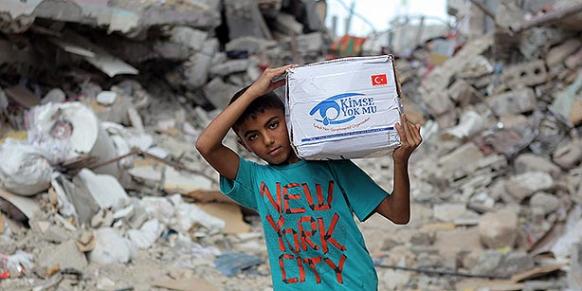 Turkish charity Kimse Yok Mu’s (Is Anybody There) right to collect charity donations has been withheld because of a recent Cabinet decision.

On Monday, the Taraf daily ran a story arguing that the Justice and Development Party (AK Party) government planned to remove Kimse Yok Mu’s public interest status, which would prevent it from collecting donations. The report argued that the proposal was pending with the Cabinet, expecting it to take effect before the Eid al-Adha holiday, which will start on Saturday.

However, this decision came even before the Eid al-Adha holiday. İsmail Cingöz, the president of Kimse Yok Mu, announced the Cabinet decision via his official Twitter account on Thursday. With the decision, Kimse Yok Mu will no longer be able to collect financial donations from the public.

Kimse Yok Mu gave an official statement on Monday harshly criticizing the decision, as there are no legal grounds for it. “We do not want to believe that the government would be part of such a plot against our organization,” the group said in its statement.

Prior to this statement, Kimse Yok Mu held a press conference on Monday morning. Kimse Yok Mu Secretary-General Savaş Metin said the government’s new aim is to remove the status of “public interest” from the association, which allows it to collect money without receiving permission government — it is a politically motivated move. The organization is a humanitarian NGO and strictly apolitical.

Kimse Yok Mu is the only aid organization in Turkey that holds UN Economic and Social Council (ECOSOC) special consultative status, and it developed internationally recognized relief programs in partnership with the United Nations Human Rights Council (UNHCR) in 2013. It was also granted the Turkish Grand National Assembly Outstanding Service Award in 2013, under the AK Party rule.

However, a smear campaign against the organization has been launched since Dec. 17, with the breaking of a corruption investigation into leading AK Party figures. Due to a government grudge against the grassroots Hizmet movement — it holds the movement responsible for the corruption investigation — President Recep Tayyip Erdoğan, who was previously prime minister and AK Party chairman, has targeted Kimse Yok Mu, which is influenced by the Hizmet movement.