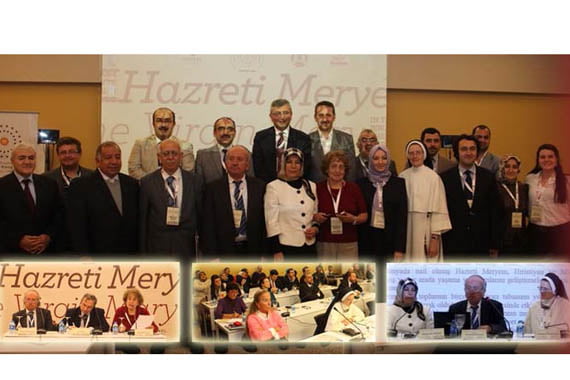 Bishop Sahak Mashalian of Armenian Patriarchate of Istanbul in his presentation said two women namely, Virgin Mary and Eve have always been revered in monotheistic religions. “Virgin Mary has been a source of inspiration for many. No other woman in history has been as influential as Mary, the woman of few words.

Emine Eroglu, Timas Publishing Editor-in-Chief in the session two delivered her presentation entitled “Al-nafs Al-safiya (purified lower self) and Mary as the Chosen One.” Eroglu noted that God sent a message to the male-dominated community of the time by naming Jesus as “Jesus, Son of Mary.”

As the panel drew to a close, a committee of presenters gathered to draft the final declaration, following a video clip on Virgin Mary. The declaration committee under the leadership of Prof. Omer Faruk Harman was comprised of Prof. Chaterine Joseph Droste, Dr. Mustafa Alıcı, Dr. İsmail Taşpınar ve Kadriye Erdemli.

In the final declaration of the panel “The Virgin Mary in the Holy Bible and The Holy Qur’an”, it was noted that Virgin Mary who broke many discriminative taboos of her time played a significant role throughout history in placing women in the status they deserve.