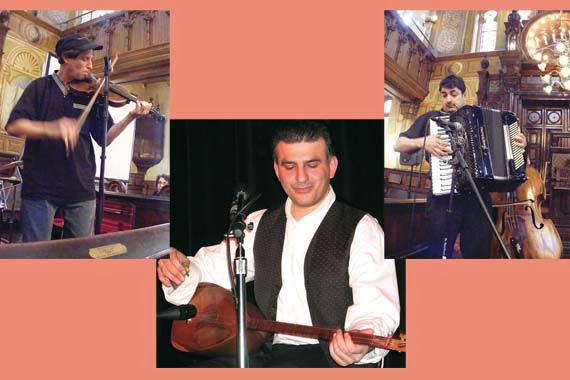 For years, Phil Kruger of Montville has been interested in interfaith dialogue. He’s led fellow members of Congregation Agudath Israel in Caldwell in comparative studies of the Koran, the Torah, and the Christian Bible, and led a group of Jews, Christians, and Muslims in regular text study. Now he is taking his interest in a musical direction — as the organizer of an Oct. 20 concert of Jewish and Muslim musicians.

“Many Voices — One God” will include Amir Vahab and Ensemble, who perform Iranian and Sufi music, and the klezmer musician and historian Yale Strom. He’ll be joined by accordionist Peter Stan, who performs a style of klezmer music that has its roots in Turkey.

Serving as a resource for the event at Agudath Israel is the Peace Islands Institute. A Newark-based organization formerly known as the Interfaith Dialogue Center, it is affiliated with the Gulen movement, a Turkish-based Islamic network active in interfaith relations.

Kruger believes Jewish community members and local Turkish Muslims have much to share with one another.

“Our relationship has been strong,” Kruger said. “There is no reason why we can’t do things together. There are plenty of things we have in common. The similarity of religious services. The modesty issue in regard to women. Halal and kashrut are not dramatically different. Once you get to see these things, the politics become somewhat less important.”

Kruger said he joined members of the Peace Islands Institute on a visit to Turkey about six years ago and has been a guest at members’ homes for Muslim holiday dinners.

“At a number of events,” he said, “they have had Middle Eastern music, which I have enjoyed, and I thought that it would be a nice thing to bring to my synagogue.”

His outreach efforts with a local Muslim community dovetail with what he calls his synagogue’s “incredible relationship” with the other local houses of worship.

In January, the synagogue and Notre Dame Catholic Church in North Caldwell organized an interfaith pilgrimage to Israel in observance of Agudath Israel’s 90th anniversary and the 50th anniversary of the Roman Catholic parish.

A year ago, Kruger attended a lecture by Strom at the College of Saint Elizabeth in Morristown. “He said that klezmer has Middle Eastern roots,” Kruger recalled. “That comment raised my eyebrows, and I sent him a letter saying, ‘I am trying to put together a Middle East concert and he was immediately interested in an interfaith concert.”

Kruger began his interfaith efforts with the Turkish group before relations between Turkey and Israel soured following the Gaza flotilla crisis in May 2010.

“But even though the politics between Turkey and Israel have gone south…, I had already developed close relationships and considered a lot of these people to be my friends,” he said. “I said to myself, ‘They are not Turkey. They are not representatives of the Turkish government, nor am I a representative of the Israeli government. There is no reason why these relationships should not continue.'”

Meanwhile, said Kruger, he hasn’t received any negative comments from fellow congregants since the concert was announced.

“I don’t know of too many people who hear any music and find themselves in a fighting mood,” he said. “It is a calming force, a unification force, and it is entertaining.”