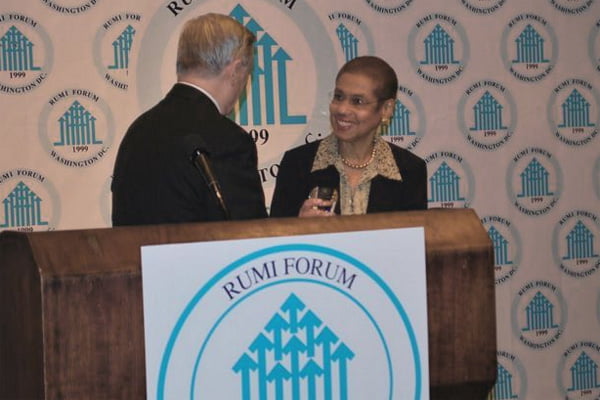 I can accept only as an inspiration to take back the spirit of [13th century poet and Islamic scholar Mevlana Jelaluddin] Rumi to the House, where I serve,” Congresswoman Norton said in her speech

The Rumi Forum, a think tank established by Turks living in Washington, D.C., to foster intercultural dialogue, has presented its traditional Peace and Dialogue Awards.

The 2010 Rumi Peace and Dialogue Awards ceremony was held on Tuesday at the National Press Club’s Ballroom in Washington, D.C. The think thank gave awards to extraordinary individuals and organizations who have contributed much of their time, energy, leadership and dedication to the causes of dialogue, understanding, peace and community service.

The think tank honored US Secretary of Education Arne Duncan with the Extraordinary Commitment to Education Award. Ken Bedell, a senior adviser of the US Department of Education’s Faith-Based and Neighborhood Partnership Center, received the award on Duncan’s behalf and read out an acceptance message in which Duncan said: “I’m humbled. We still have a long way to go to ensure that our schools are not only safe but also centers of peace. The Rumi Forum is an important partner in our shared work of creating a safe environment by promoting interfaith dialogue where we can all come to a better understanding of each other.”

Bedell also delivered a speech while receiving the award. “At the Department of Education we don’t deal with the really big issues of world peace. We deal with the really big issues of making our schools a place at which American children are not only safe but learn to grow academically, learn to grow with each other. [Honorary chairman of the forum and an Islamic scholar] Fethullah Gülen put it extremely well when he said: ‘In schools good manners should be considered just as important as other subjects. If they are not, how can children grow up with sound character? Education is different from teaching.’ That’s what we believe at the Department of Education. Good manners are different from teaching,” he said.

The Rumi Forum awarded Eleanor Holmes Norton, congresswoman for the District of Columbia, with the Congressional Service Award. “Your mission of improving interfaith and intercultural dialogue makes me want to bring you to the Congress of the United States. I regard the award you’ve been kind enough to give me as one I can accept only as an inspiration to take back the spirit of [13th century poet and Islamic scholar Mevlana Jelaluddin] Rumi to the House, where I serve,” Norton said in her speech.

Professor Ori Soltes from Georgetown University also delivered a speech during the award ceremony in which he made references to philosophy. “Gülen is both a student of Socrates and Plato and a student of Rumi, someone who spent a lifetime trying to negotiate a territory of genuine dialogue of listening, not just speaking, and working together across denominational lines, be they religious, ethnic, national or racial — all kinds of lines into which we humans tend to carve ourselves up, both really and artificially. Gülen is very much a child of the idea of speaking across lines. The idea that underlies the Gülen movement is an idea not only about talking but action. The Gülen movement is hizmet [service]. It’s about action,” he said.

The Rumi Forum was founded in 1999 with the mission to foster interfaith and intercultural dialogue, stimulate thinking and the exchange of opinions on supporting and fostering democracy and peace the world over, and to provide a common platform for education and information exchange. The Rumi Forum endeavors to foster the noble ideals of Rumi, bringing people and ideas together for a more peaceful coexistence.