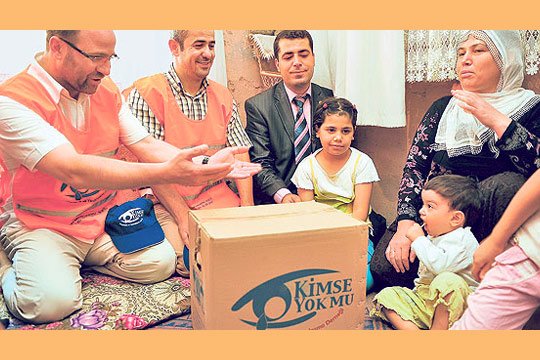 Around 300 volunteers from the Kimse Yok Mu charity will be delivering food packages to 90,000 families across Turkey during the holy month of Ramadan. (Photo: Today's Zaman)

The Kimse Yok Mu (Is Anybody There) charity foundation will be offering aid packages to 90,000 families in all the 81 provinces during the holy month of Ramadan. The fasting month of Ramadan, deemed the sultan of all the months by Muslims, is considered the most venerated, blessed and spiritually beneficial month of the Islamic year.

During this month, prayers, fasting, charity and self-accountability are particularly emphasized, and all obligatory religious observances are further encouraged at this time, as this month was called by the Prophet “the month of my people [Ummah].”

For this reason, Kimse Yok Mu, as well as other charity organizations, will actively operate under the slogan “Between sahur [the last meal eaten before the day’s fasting begins during Ramadan] and iftar [the fast-breaking meal] is the time to share in Ramadan.”

Following a recent visit to the Malatya branch of Kimse Yok Mu, the charity’s chairman, Ünal Öztürk, met with Malatya Governor Ulvi Saran. During the visit, Öztürk said the charity has been reaching out to people in need of aid not only in Turkey but also in many other countries around the world for over 10 years.

“We have completed our preparations for Ramadan during which we will distribute 90,000 food packages in all the provinces across the country,” Öztürk said, adding that the charity will also provide help to people in need from 70 countries by offering sahur and iftar meals during Ramadan.

During the visit, the Malatya governor expressed his appreciation for the charity’s relief efforts and said that helping people in need of aid is a characteristic of the Turkish people.

Kimse Yok Mu has been distributing aid packages during Ramadan since 2007. Last year, the organization distributed a total of 53,815 food packages across the country and about 51,000 packages in 52 countries, including hunger-stricken countries such as Somalia, Kenya, Uganda and Ethiopia.

Kimse Yok Mu is calling all potential donors to help this humanitarian campaign. To donate TL 5 to the charity, send the word IFTAR in an SMS message to 5777. An aid package that will be delivered to a family in need costs TL 70 ($40, 30 euros).