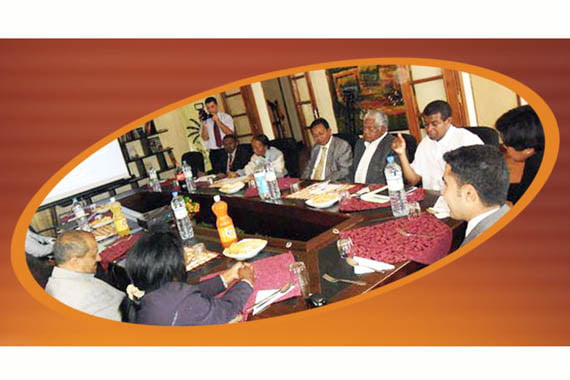 In his inaugural address, the Turkish ambassador Artemiz Sumer underscored the contributions of the Turkish schools active worldwide to global peace and further thanked Ravinala Culture and Dialogue Institute for its efforts in Madagascar. Sumer noted that Turkey, with its long-established past, has been a home to remarkably diverse nations coexisting in peace.

Antananarivo State University Rector Ramanoelina, in his speech on significance of coexistence, dialogue and mutual tolerance, said “I would like to express my sincerest thanks to Ravinala Culture and Dialogue Institute. Currently, there exist 18 different ethnic communities in Madagascar. We, Madagascans -as members of various animist faiths alongside Islam and Christianity- have been living in harmony. Terrorist incidents are taking place around the world. They do not happen in Madagascar, yet, we have to raise a strong awareness among our youth.”

“The most brutal scenes are on stage in the name of Islam, in a vast area ranging from Syria to Pakistan and Kenya. Perpetrators are bombing mosques and churches, slitting throats by alleging that it’s Quran’s command. Is it possible to explain the atrocity and terrorism by certain organisms worldwide with solely external powers and motives? I condemn them all. The image reflects the truth, yet, it is, in addition, an image that embarrasses us. It is like a tar stain sprayed on Muslims’ faces.”

Closing the symposium, the attendees remarked that number of similar events should increase, and that any efforts for the sake of establishing peace, dialogue and tolerance in Madagascar and the world at large should be promoted.

Hosted by the Lehigh Dialogue Center, Turkish Cultural Center of Pennsylvania and Bethlehem the second annual Ramadan Tent Dinner in the city observed the ninth month of the Islamic calendar. “Bethlehem is a melting pot,” Mayor Callahan said. “This event is an opportunity for us to learn more about each other as individuals. This is how we grow.”