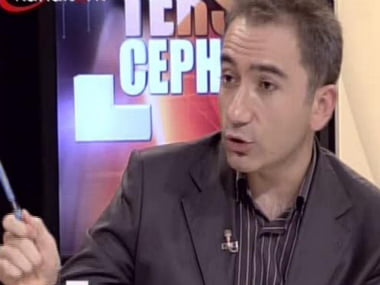 There was an interesting story in the Daily News last week, about the cancelling of a Yuval Ron concert in Istanbul. Mr. Ron, an award-wining Israeli musician, was supposed to play his tunes in a Sultanahmet hall, but the event was cancelled at the last minute due to protests, and, allegedly, some “threats.” The organization holding the protest – but denied any threat – was the famous Humanitarian Relief Foundation, or İHH, that organized last year’s controversial Freedom Flotilla to Gaza, which was lethally raided by Israeli commandos.

The İHH, of course, is an Islamic-minded organization. Therefore, I received a few emails from Western friends complaining how Islam and its ascendant role in public life are making Turks fanatically anti-Semitic. If Turkey had been dominated by more-secular minded Turks, these friends added, it would have been a tolerant and loving, and particularly Israel-loving, society.

But there was an interesting detail in the Yuval Ron story that my Islamo-sceptic friends, and probably most others, were missing: The organization that helped organize the concert of the Israeli musician was quite Islamic-minded as well. It was the Intercultural Dialogue Platform, founded by none other than the followers of Fethullah Gülen, Turkey’s most influential Muslim religious leader.

In fact, the Gülen Movement, as it is called, has probably been the most active force against anti-Semitism in Turkey in the past two decades. Until his departure from Turkey in 1998, one of Gülen’s best friends was Turkey’s chief rabbi and the two men routinely appeared in front cameras for joint “Abrahamic” prayers. To date, Gülen’s followers have held dozens of interfaith meetings in Turkey and elsewhere, and their media outlets have persistently promoted understanding between Muslims and Jews.

Even on the flotilla incident, Gülen took a different line than that of the Justice and Development Party, or AKP, government he supports, and said it would have been better if the flotilla sought a deal with Israeli authorities to bring humanitarian aid into Gaza.

Of course, there are also anti-Semitic strains in the Islamic camp. The daily Vakit, and the marginal Saadet Party, which got one percent of the votes in last weekend’s elections, are unabashedly anti-Israel and use rhetoric that often turns outright anti-Jewish. But similar rhetoric exists also among Atatürk-venerating secular nationalists “ulusalcılar,” who believe in crazy conspiracy theories about how Jews are supposedly buying Turkish land in the southeast to incorporate into “greater Israel.” One of these lunatics even wrote a bestselling book in 2007, which argued that Prime Minister Recep Tayyip Erdoğan was a crypto-Jew who was “selling” Turkey to “Jewish capitalists.”

The Turkish picture about Israel, in other words, is not black-and-white. We are not divided between Israel-hating Islamics and Israel-loving seculars.

Erdoğan’s party, for that matter, is somewhere between the Saadet and the Gülen Movement, if we put these in a spectrum and closer to the latter rather than the former. Most Israelis, who really are not in a love affair with Erdoğan, might find that hard to believe, but they should recall that the AKP leader had pretty good relations with the Jewish State until the end of 2008, when “Operation Cast Lead” began killing hundreds of innocents in Gaza. Erdoğan and his team passionately care for their Muslim brethren in Palestine, just like many American Jews care for theirs in Israel. Besides, they can not just sleep over the killing of nine Turks in international waters by Israeli soldiers, which has become a matter of national pride. But they ultimately support a two-state solution, and can be quite helpful in building it.

So, here is a friendly advice to Israeli policy makers and their advisors: Stop dreaming about the days when Turkey will become hyper-secular again. Those days are gone and Turkey’s Muslim identity is here to stay. But it might not be as bad as you fear, especially if you try to build bridges and reconsider some of your hawkish and intimidating policies.