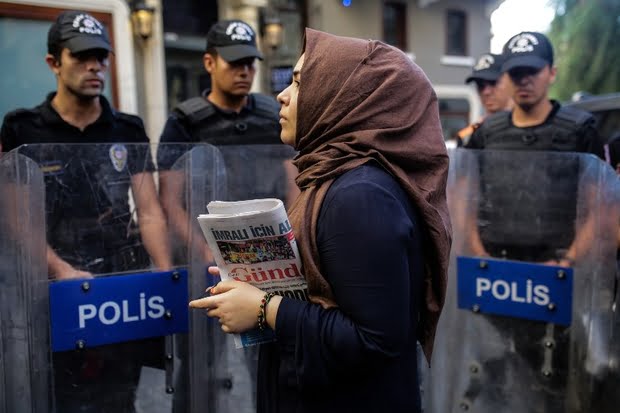 A woman holds a "Ozgur Gundem" newspaper in front of a police barricade on August 16, 2016 in Istanbul. A Turkish court has ordered the temporary closure of a newspaper accusing it of links with Kurdish militants and spreading terrorist propaganda. / AFP PHOTO / YASIN AKGUL

In the wake of the thwarted coup of 15 July, President Recep Tayyip Erdogan declared a state of emergency, bypassing parliament and enabling rule by presidential decree. The decrees he issues no longer need to comply with the constitution or with the European Convention on Human Rights, to which Turkey is a signatory.

Following the declaration the administration moved swiftly to curtail freedom of expression by shutting down almost all opposition media outlets. The few media outlets that remain are pro-government or need to prove their loyalty to Erdoğan’s definition of democracy as presidential rule combined with a populism permitting no dissent.

Turkey now has the highest number of imprisoned journalists in the world, with three times the number jailed as Iran and China

Immediately after the failed coup, the administration published lists of people that Erdogan claimed had participated in the coup. The lists included people from all professions, and journalists were no exception.

The speed with which these lists appeared indicated that they had been prepared before the coup. Dogu Perincek, the leader of the nationalist Vatan Partisi, and who is now an ally of the ruling party, explained on live TV that there were indeed pre-prepared lists and that it was he who had handed over those lists.

Turkey now leads the group of countries with the highest number of imprisoned journalists, with three times the number of journalists jailed in Iran and China. Twitter has censored over 23 accounts of journalists, at least 12 of them verified accounts.

According to Reporters Without Borders, Turkey is ranked 151st position out of 180 countries in terms of media freedom. 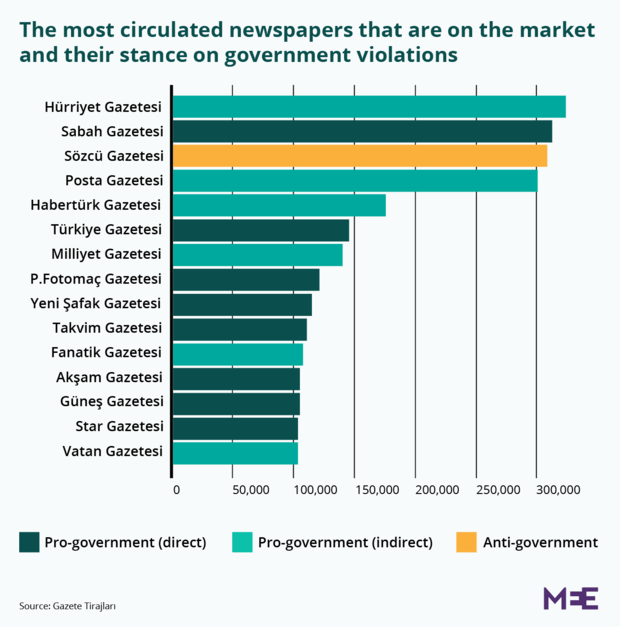 Journalists were taken into custody without due process (no grounds given) and en masse. They include top intellectuals and writers such as Asli Erdoğan, shortlisted by respected French literary magazine Lire in 2005 as one of the “50 most promising authors of tomorrow”. Experienced writers, such as Ahmet Turan Alkan, Ali Bulac, and 72-year-old Nazli Ilicak, as well as young reporters like Busra Erdal and local journalists have been detained. Many have also been barred from seeing their lawyers and families while in custody.

Some of the targeted journalists were not in their homes when police arrived. The wife of Bulent Korucu, former chief editor of political weekly Aksiyon, was taken into custody in his stead. Hacer Korucu told her lawyer: “The police officers said to my children, ‘The noose is tightening. If your dad doesn’t come in, we will take you next time.’ That destroyed me.” The teacher brother of journalist Bulent Kenes was also detained, as was the father of Merve Reyhan Kavikci.

A total of 124 journalists are listed as arrested. However, their families and lawyers cannot reach many of them. The State of Emergency prolongs to 30 days the permitted duration of stay in custody before charges have to be placed, and the prosecutors’ offices and police have not responded to applications by families who cannot contact their relatives. The police and prosecutors have even failed to disclose the names of some of the detainees.  Of 19 journalists from TRT (Turkish National TV and Radio Channel) who were arrested in the second week of August, only the names of Ahmet Böken and Hakan Aksel are known. The remaining 17 journalists have not been identified.

Who and where are they all?

The number of journalists arrested to date whose names can be established is 120. When the 17 unnamed journalists from TRT are added, the number rises to 137. There are still journalists whose condition and whereabouts are unknown.

While Erdogan claims the coup was staged by Gulenists (but can produce no proof to support demands for his extradition from the US), the independent journalist Mahir Zeynalov has pointed out that it is “not enough to be against the coup in Turkey. You have to say it is a Gulen-driven coup. Otherwise you either lose your job or your freedom“.

Leading journalist Can Dundar – who has been sentenced to five years in jail for leaking state secrets but left the country in August while on appeal – has resigned from his post as editor of secularist Cumhuriyet and says that he will stay outside Turkey as he fears the government will attempt to link him to the putsch attempt. Now, critical journalists must ask permission to leave the country; some have had their passports seized.

Even prior to the coup attempt, Erdogan was increasing his personal control of the state in Turkey. The AKP, at his instigation, had already conducted purges in the state bureaucracy, media and academia, the judiciary, civil society, education and the charity sector. He also had a number of private companies and a bank seized.

Although the AKP failed to make its promised changes to the constitution of Turkey, the president altered his role from that of a neutral, unifying head of state (as the constitution requires) to a de facto executive president in which he has claimed full control of the government. The prime minister’s role now seems no more than an aide-de-camp to the president. To achieve this, Erdoğan summarily replaced the man who had been believed to be his “hand-picked” successor, Prime Minister Ahmed Davutoğlu, with another long-term friend, Binali Yildirim, who has proved more amenable to the reduced role.

It was correct and desirable for putschist officers to be arrested. However, disturbingly at this delicate point, the subsequent purges have also extended to the judiciary – almost 3,000 judges and prosecutors have been removed; some of them have been arrested and their private property confiscated. But while Erdogan claims that the putschists were Gulenists, he had also carried out very extensive purges of the police and judiciary well before 15 July and already claimed to have removed all Gulenists.

The post-15 July purges, therefore, can only be intended to remove any remaining members of the judiciary with the faintest pretensions to independence from the executive. This means that from that long list of arrested journalists, no one has the slightest chance of a fair trial. Erdogan’s stranglehold on Turkey is complete.

– Ismail Sezgin is the director of the London-based Centre for Hizmet Studies. He has a doctorate on Gulen’s philosophy, follows the Hizmet movement and its work closely as part of his academic interests, and comments about it regularly.

The views expressed in this article belong to the author and do not necessarily reflect the editorial policy of Middle East Eye.

Photo: A woman holds a “Ozgur Gundem” newspaper in front of a police barricade on August 16, 2016 in Istanbul. A Turkish court has ordered the temporary closure of a newspaper accusing it of links with Kurdish militants and spreading terrorist propaganda. (YASIN AKGUL / AFP)

The government of Turkish President Recep Tayyip Erdoğan is falsely accusing anybody that opposes it of treason, a prominent Turkish journalist currently detained in an Istanbul prison