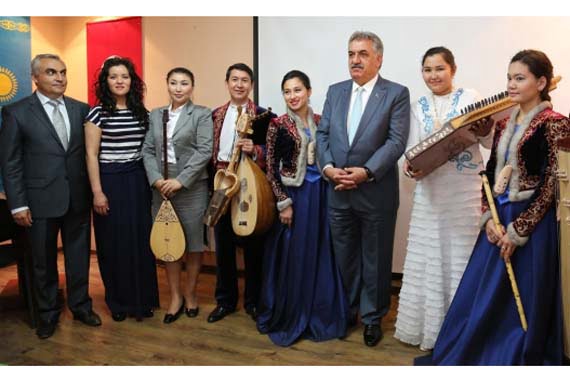 As a part of his agenda, Hayati Yazici hosted by the Kazakh Finance Minister Bolat Jamisev, met with the Turkish businessmen engaged in Kazakhstan at Rixos President Hotel on June 21. Yazici briefed the businessmen on his ministry’s activities and responded to their questions at the meeting organized by Association of Kazakh-Turkish Businessmen (KATIAD).

Yazici’s next stop was Yunus Emre Culture Center where he was briefed by the president Ibrahim Yildirim on the institution’s activities. Song performances in Turkish by the center’s language course students got the thumbs up from the minister the delegation accompanying. Noting that Turkish arts and culture are being promoted at similar institutions around the world, the minister said, “We are glad that Turkish, above all, -the language of love, brotherhood and tolerance- is offered at these institutions.”

The minister Yazici and his delegation visited Nurorda International High School later the same day. The school’s principal Orhan Oztomsuk and students greeted them upon their arrival at the yard. Having posed to the cameras for a picture with students, the minister proceeded to take a school tour. The students performed songs for the guests including Turkey’s Ambassador to Kazakhstan Omer Burhan Tuzel and Turkish businessmen in Astana as well. Yazici was surprised to see his picture among the state officials’ having visited the school earlier. The school officials-who printed out his picture with the students and put it on the wall right away-had planned it to surprise the minister.

Highly pleased with the school’s condition, Yazici presented a silver evil eye ornament to the principal Oztomsuk. The principal in return presented a Kazakh tent symbolizing unity in Kazakh tradition. The minister was to proceed to Almaty and then depart for Turkey the following day.

Spectrum Turkish School in Yas city of Romania moved to its new building on Tuesday with a ceremony. Turkish schools which have been operating in Romania for 21 years continue to develop. The school which has a capacity of 500 students gained new building.