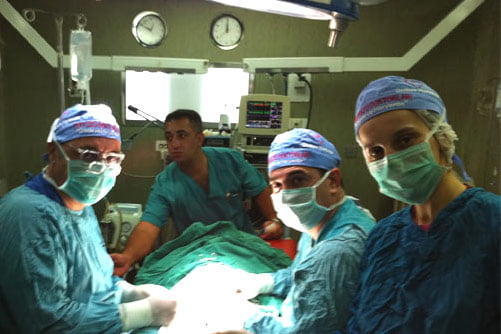 The Turkish wing of the UK aid group Doctors Worldwide and Turkish charity Kimse Yok Mu (Is Anybody There) are set to extend a helping hand to the people in Gaza, which has been experiencing Israeli attacks since Wednesday.

A written statement from Kimse Yok Mu has said that the foundation is preparing to send aid packages containing medical equipment, food and winter items like blankets and sweaters, to war-torn Gaza. The foundation will also replace windows broken by powerful explosions, the statement said.

A statement released by the aid group said the team, which includes urologists, plastic surgeons, neurologists and ophthalmologists, is scheduled to leave for Gaza on Nov. 24 to distribute medical supplies and perform surgery.

The statement also said that the group has launched a donation campaign to collect medical supplies for Gazans.

The group’s Vice President Kerem Kınık said a large number of Gazans had been wounded and killed in the Israeli strikes and the wounded have been unable to receive medical care as a result of the Israeli authorities’ near total ban on importing medical supplies to the territory.

By Tuesday, 115 Palestinians, including 54 civilians, had been killed since Israel mounted an air onslaught last week that has so far included nearly 1,500 strikes. Some 840 people have been wounded, including 225 children, Gaza health officials said.

Kınık said those who want to extend a helping hand to Gazans can send a blank SMS message to 6612 or visit www.yeryuzudoktorlari.org to make an online donation.

Two Pak-Turk students, Mukarram Fatah and Yasir Jan, hailing from the most backward areas of the province – Jaffarabad and Chagai, respectively – have won silver and gold medals in Kenya for their projects.

Islamic scholar and prominent Turkish figure Fethullah Gülen has called on his followers to pray for an end to the current tribulations in Syria and Palestine, according to Herkül.org, a website close to the movement. Gülen, who lives in self-imposed exile in Pennsylvania but remains an influential figure on Turkey’s political scene, said the problems […]