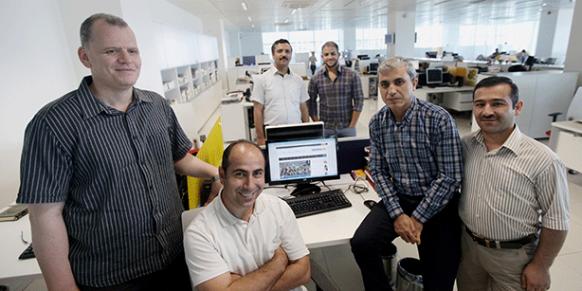 Zaman Arabic aims to share the most recent news, political analyses, op-eds and research on Turkey with the Arab world in an objective manner, according to the managing editor of the portal, Cumali Önal, who has returned to Turkey after spending years as the Cairo correspondent of the Zaman Media Group. Önal said that at a time when both Turkey and the Middle East are going through a critical period, Zaman Arabic will share the 28-year journalism experience of the Zaman Media Group with the Arabic-speaking world. According to Önal, for years both Turks and Arabs have learned about each other from secondary sources in other languages, primarily in English. Zaman Arabic’s target is to become a “reference” for news about Turkey in the Arab world.

Stating that they would like to fill the void in the field of reporting in Arabic from Turkey, Önal said that for years, people in the Arab world have used Western media outlets as their basic source of information about Turkey. He added that the current developments in Turkey — such as the corruption probe — are very relevant to what is going on in the Arab world. Önal also urged the Arab public not to take all news reports concerning Turkey for granted and to refer to credible sources, as he outlined Zaman Arabic’s desire to become a reference on Turkey for Arabic speakers.

Announcing the launch of Zaman Arabic in his weekly column, the editor-in-chief of the Zaman daily, Ekrem Dumanlı, wrote that the news portal in Arabic will open new horizons. Dumanlı said that Arab readers will find accurate stories and in-depth analyses and ideas in Zaman Arabic to better understand not only Turkey but also the Middle East and the world.

Dumanlı said that the Arabic news portal from the Zaman Media Group is a product of months of diligent work by an excellent team. According to the Zaman editor, Zaman Arabic will not only function as a simple website that includes the translation of Turkish stories and columns but will, in addition to columns by Turkish journalists and intellectuals, be a forum for intellectuals from the Arab world and other countries in an effort to bring a different perspective to readers.

According to Dumanlı, Zaman Arabic — which has been in test broadcast quietly for the last couple of months — was born as a result of a series of meetings and brainstorming.

Önal also said that the news portal will prevent the dissemination of inaccurate information in both Turkish and Arabic societies.