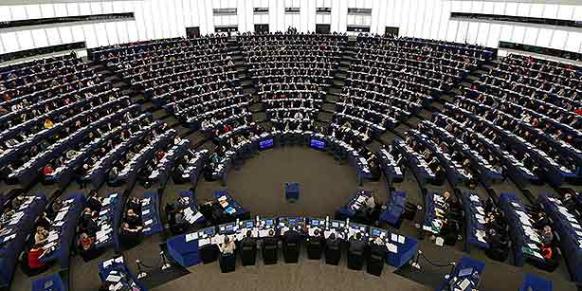 As a result of the increasing pressure, raids, bans and restrictions on Turkish media, the EP wrote a strongly worded resolution, which was voted on in Strasbourg, stating it: “Condemns the recent police raids and the detention of a number of journalists and media representatives on Dec. 14, 2014 in Turkey and stresses that these actions call into question the respect for the rule of law and freedom of the media, which is a core principle of democracy.”

The government-backed operation against independent media outlets that took place on Dec.14 and resulted in the detention of dozens of individuals including Zaman Editor-in-Chief Ekrem Dumanlı, Samanyolu TV network top executive Hidayet Karaca, script writers, producers and directors, caught the attention of the European Union. The detentions sparked reaction across the world, from Canada to France. Foreign government officials and human rights watchdogs defined the media crackdown as another blow to freedoms in the country and called on Turkey to respect media freedom.

The resolution, seen as harsh warning to Turkey in terms of press freedom, prepared by political parties in the EP, was approved with 551 votes for 11 against, with 31 abstentions in Strasbourg.

The EP noted that a free and pluralistic press is an essential component of democracy in the country, as is due process, the presumption of innocence and judicial independence.

Although the raids on Zaman and Samanyolu were first seen as the government’s attempt to abolish the faith-based Hizmet movement, the detention of journalists showed that it is press freedom in Turkey that is at stake. The raids that started on Dec.14 against the Hizmet movement continued to a larger degree with the detention of several other journalists. Turkish journalist Sedef Kabaş was detained and later released on Dec. 30 for posting tweets critical of the government’s handling of a major corruption investigation, while Dutch journalist Frederike Geerdink was temporarily detained on charges of terrorist propaganda. The detention of another Dutch journalist, Mehmet Ülger, who was arrested upon arrival at the airport in İstanbul, interrogated at a police station and released later that day, showed that government’s efforts to intervene in media also include foreign media representatives based in Turkey.

The EP resolution also stressed that the government should provide “ample and transparent information” on the allegations against the defendants and grant the defendants, “full access to the incriminating evidence and full defense rights.” It called on the Turkish government to ensure the proper handling of the cases and to establish the veracity of the accusations without delay and beyond “reasonable doubt.”

Dumanlı, Karaca and several former police chiefs and the producers of a TV series, were detained on the grounds of allegedly being members of a terrorist group without any solid evidence against them but rather based on two columns, a report that appeared in the Zaman daily and a TV series. Although Dumanlı was released pending trial, Karaca has been held in detention. The detentions came days after a government-sponsored bill, which made it possible to arrest suspects based on “reasonable suspicion,” was signed into law.

The ruling Justice and Development Party’s (AK Party) decreasing tolerance of public protests and critical media was also noted in the resolution approved by the EP’s major political parties.

“The arrests on Dec. 14, 2014 fall into a deplorable pattern of increased pressure and restrictions on press and media outlets, including internet based social media and fora,” the EP said. The resolution further underlined that website bans are of a disproportionate scope in Turkey, calling on Turkish judicial authorities to review and address these cases as soon as possible.

The government’s harsh response to the nationwide Gezi Park protests in 2013, which started due to environmental concerns but turned into anti-government protests across the country, had already caused a stir in Europe for the way the government handled it. The latest crackdown on the media, intervention by government officials in media broadcasts and the recent arrests — that included minors — for insulting President Recep Tayyip Erdoğan, increased fears that Turkey is sliding towards authoritarianism and moving to silence any opposition. Webpage bans have also become common, another method used by the government to deal with criticism of its policies and practices.

The EP also urged Turkey to work on reforms, “which should provide for adequate checks and balances fully guaranteeing freedom, including freedom of thought, expression and of the media, democracy, equality, the rule of law and respect for human rights.”

In the resolution, the EP once more underlined the importance of freedom of the press and respect for democratic values for the EU, which Turkey has been struggling to join for almost 50 years, and recalled that freedom of expression and media pluralism are at the heart of European values.

“[The EP] urges, in this regard, the Government of Turkey to address media freedom as a matter of priority and provide an adequate legal framework guaranteeing pluralism in line with international standards; [it] further calls to stop pressure and intimidation against critical outlets and journalists,” read the resolution.

Calling for increased attention to independent media within the framework of the Instrument for pre-Accession, the EP underlined the importance of also supporting civil society organizations in this regard.

The resolution instructs the EP President Martin Schulz to forward this resolution to the Council, the Commission and the High Representative of the Union for Foreign Affairs and Security Policy as well as the Turkish government and Parliament.

The major political parties in the EP also separately issued a statement after the resolution vote that harshly criticized the police raids and the detention of journalists and media representatives in Turkey, underlining that these actions undermine the freedom of the media.

In a statement released on Thursday, the Socialist Democrats in the EP underlined that in a democratic country the freedom to criticize the government or the ruling party cannot be limited — or put under threat.

“We strongly believe that the Turkish government should address media freedom as a matter of priority and provide an adequate legal framework to guarantee pluralism in line with European and international standards. As we are committed with the European perspective of Turkey, we call on the Turkish government to review the legal provisions that are used to restrict the rights to freedom of expression, association and assembly, and the right to access to information, and to bring them into line with European standards,” Socialist Democrats President Gianni Pittella said.

The EP rapporteur to Turkey, Kati Piri also voiced concern about the backsliding on democratic reforms. Piri said developments in the country call for more engagement with Turkey in order to increase pressure on the government. Piri called for the opening of chapters 23 and 24 dealing with the rule of law and human rights to allow both parties to engage in a genuine dialogue and give Turkey the opportunity to prove its commitment to democratic reforms.

The European Free Alliance Group (EFA) in the EP also called on the Turkish government to end media restrictions.

A member of the European Parliament’s Turkey delegation, Ernest Maragall, called on the Turkish government to stop interfering with media freedom and freedom of expression, which he says are core values for the European Union, in a statement released after the vote.

Maragall referred to a Turkish court order banning access to some online news portals that featured Charlie Hebdo’s latest front cover and recalled that Turkish police also raided the Cumhuriyet daily after the newspaper announced that it would distribute a four-page selection of the latest issue of Charlie Hebdo in an act of solidarity.

Underlining that social media platforms Twitter and Facebook are once again under threat after the Turkish authorities warned that websites publishing alleged records related to Syrian-bound trucks belonging to Turkey’s Intelligence agency will be banned, Maragall said: “Recent developments cast serious doubts over Turkey’s aspirations to join the European Union. We urge the Turkish government to work on reforms to reverse the undermining of judicial independence and fundamental rights.”

He said that the EFA supports talks on Turkey’s negotiating process but said that negotiation talks should be conditional on the effective adoption of legislative reforms consistent with the principles of respect for the rule of law and fundamental rights.

“The EU should adopt a firm stance towards the Turkish government and seek positive engagement with Turkish citizens,” he said.