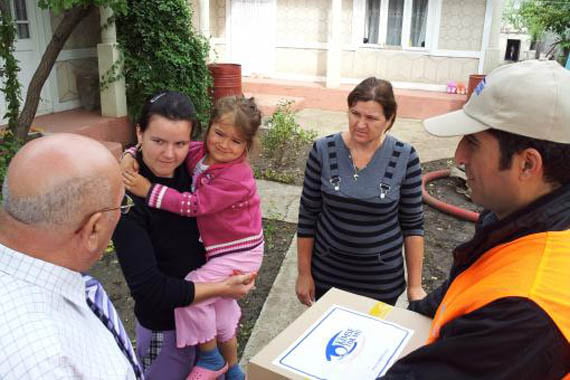 Turkish businessmen extended a helping hand to the flood victims in the eastern Romania. The locals received the philanthropists who went door to door to deliver the relief aid, in tears.

The flood two weeks ago that hit the Galati region in the eastern Romania devastated residences of thousands. The farmers’ grain harvest for the coming winter has been wasted and hundreds hectares of crop land have been flooded. Loss adjustment and disaster relief officials have been examining the residences to identify the recovery needs.

In cooperation with the local Tuna Foundation and Kimse Yok Mu Foundation, the Turkish businessmen engaging in Romania didn’t remain indifferent to the suffering and delivered the staples aid by visiting the victims door to door in company with the local administration’s officials.

Seeing the businessmen and foundations’ volunteers, the sufferers -many of whom were elderly and homeless- said, “This is what we have been hoping for,” and burst into tears. They told what they had been going through and that they had fears for the coming winter.

Having witnessed the victims’ needs on the scene, the businessmen decided to carry on with their donations. They had talks with the local administration to identify the needs for the winter. They are set to keep up their support until the suffering is over.