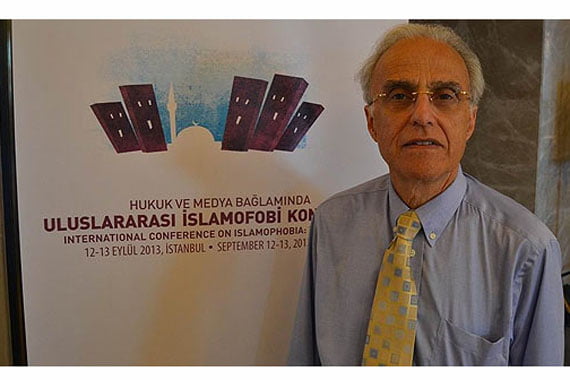 A world-renowned scholar who has written numerous books on Islamophobia has urged Muslims living in the West to integrate into mainstream society, which he says is the most effective way to defeat the Islamophobia that is taking hold in the West, particularly in Europe.

John L. Esposito, a professor at Georgetown University, told Sunday’s Zaman that the best way to be effective in beating Islamophobia is for a generation of Muslim youths to make sure that they get the training and the ability to join the mainstream in Western societies.

He said the history of ethnic groups in America and elsewhere clearly shows that these groups are marginalized early on but start to move up when they developed generations that became lawyers, doctors and those who worked in the media. He said this is a long term strategy but that it is important.

At a student level, Esposito said, they could organize speaker forums and responses to the media. He noted that students need to equip themselves to know what they are talking about and not to be merely passionate “but also get off their ‘sitting’ and actually be willing to get involved and put in some work on doing these kind of things.”

Esposito called for dialogue to fight Islamophobia on campuses and said that when students disagree with those they think are Islamophobes, “you have to able to challenge them and show why they are wrong.”

Esposito said that one has to know what’s going on in the world in addition to culture and history and be able to respond intelligently. “It’s not enough, for example, to say Islam believes in democracy,” Esposito said.

For example, Esposito said people in America or Europe will say: “Well, it’s been a century of jihad. Muslims have no history of being open to other groups in a society, they have a real problem with pluralism.” He said Muslims have to be able to talk about Islamic history and even be willing to compare it to Christian history. An argument, he continued, could be made that in Islamic history, Jews and Christians had a place in society, but by modern standards, non-Muslims are second-class citizens. “But by standards then, in Christendom, you don’t have that kind of right,” he added.

In some countries and communities, he said, there are needs for response to radicalism but particularly to the conditions that breed radicalism in their countries. He also pointed to division within the Muslim world “on almost everything.” He cited differences between Iran and Lebanon, and the Gulf.

He then asked a rhetorical question: Why aren’t there more responses from some Muslim societies and countries to the coup in Egypt and the subsequent bloodbath?

Esposito lauded Turkey’s role and efforts in defeating Islamophobia and said Turkey is a very good example of both fighting Islamophobia and its role in international affairs. He said Turkey states its positions clearly and “as we say in America ‘walks the way it talks’,” although one could accuse the West of “not walking the way it talks.” He added that some Muslim governments could be accused of talking about human rights while at the same time quietly increasing their domestic security forces and expelling people from their countries in reaction to the threat of a wave of democracy. “I think Turkey still provides a constructive model,” he concluded.

The 10th annual Intercultural Dialogue and FriendshipRamadan Dinner celebrated the ninth month of the lunar Islamic calendar on Wednesday and Thursday nights in Bethlehem. The event was free and open to the public. Other organizers and sponsors of the event were Peace Islands Institute, Turkish Cultural Center Pennsylvania and the City of Bethlehem.