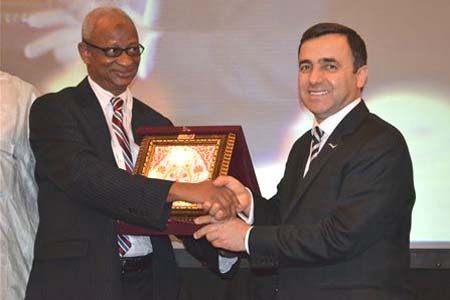 Turkish-Nigerian mutual trade could grow by leaps and bounds in the coming years as businesspeople from the two countries begin to show signs of greater interest in building partnerships and mutual investments.

The African country’s deputy chief of mission in Ankara, Foluso Oluwole Adeshida, accompanied by the deputy head of the Nigerian Association of Chambers of Commerce, Industry, Mines and Agriculture (NACCIMA) Dahiru Muhammed Ardo and 150 Nigerian entrepreneurs, was in İstanbul to participate in a meeting organized by the Turkish Confederation of Businessmen and Industrialists (TUSKON) on Thursday. The TUSKON-organized Turkey-Nigeria Trade and Investment Forum also hosted 350 Turkish businesspeople who are interested in creating business links with their Nigerian counterparts.

“Nigeria stands to be one of the largest trade partners for Turkey in Africa. … We have cultivated strong relationships both socially and politically and Turkish firms could benefit from this in the promising Nigerian markets of energy and construction,” the Nigerian government official said.

Underlining that the two countries expected to realize $5 billion in mutual trade in the mid term, Adeshida said his country expected to boost trade globally and that Turkish entrepreneurs could help improve Nigeria’s domestic manufacturing industry.

Mutual trade between Nigeria and Turkey neared $1 billion in 2012.

Also addressing the participants, TUSKON Chairman Rızanur Meral cited Nigeria on Thursday as the door to a surrounding market that has an annual trade of $700 billion.

“We place heavy importance on cementing trade and business ties with Nigeria in the months to follow. … We are eager to also branch out into third markets in Africa jointly with our Nigerian partners,” he said.