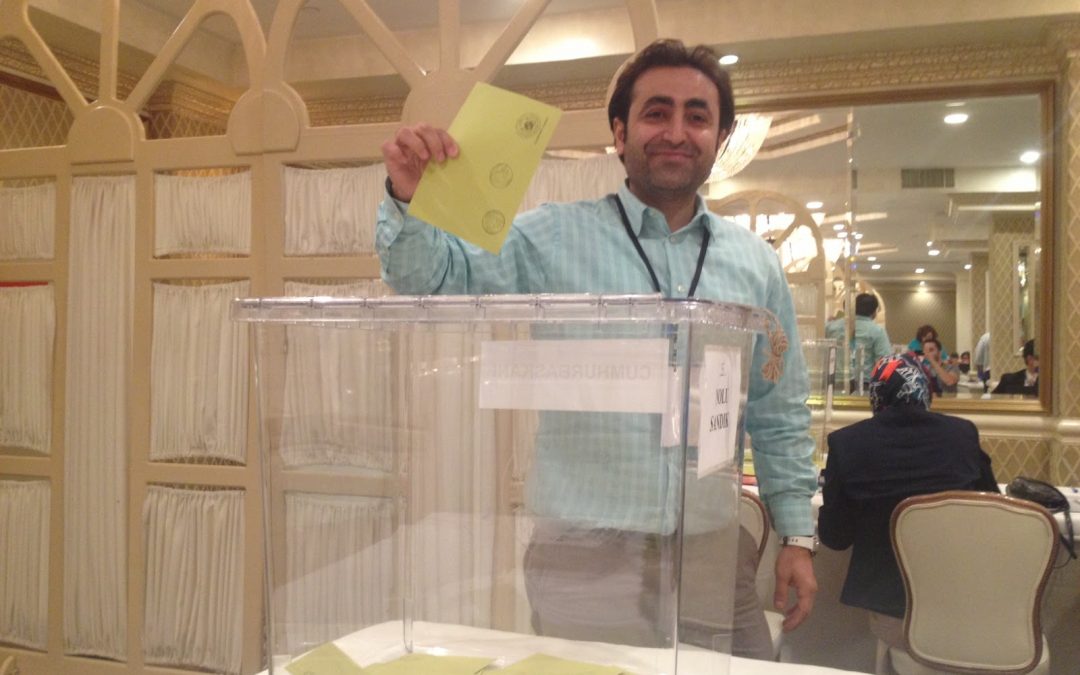 Vakkas Doğantekin, a pro-government columnist and the president of the California-based Turkish community organization, TURCA, has attacked a Turkish speaking ice-cream seller by calling him “terrorist” and “dogs of jews,” on Saturday.

“F..O supporter traitors will find no peace anywhere in the world,” Doğantekin tweeted on Nov 5 and shared the video recording below. F..O, short for alleged Fethullahist Terrorist Organization, is a controversial buzzword coined by the President Recep Tayyip Erdogan to define the Gulen movement which he considers a terrorist organization.

The quarrel took place at a Turkish community gathering, attended by several traditional food sellers. Doğantekin is seen approaching to buy ice-cream from one of the sellers and entering into rather offensive conversation with the man at the other side of the ice-cream booth.

Facing reaction against his discriminatory wording on social media, Dogantekin later tweeted: “Last saturday, I had a non-violent, non-physical, harmless verbal exchange with a Gulenist in OC and thousands of Gulenists attack me now.”

Turkish government accuses the Gulen movement of masterminding the July 15, 2016 coup attempt while the latter denies involvement. Some 250 people were killed and many others were wounded during the failed takeover. Meanwhile, Turkish government detained nearly 130,000 people and remanded 60,000 of them into prison over ties to the movement since the summer of 2016.

Dogantekin’s bio on TURCA’s website says he is a California resident for over 10 years and a freelance journalist contributing to Al Jazeera. He wrote at least three Op-Eds in 2017 for the pro-Erdogan daily news paper, Daily Sabah.

Turkey Purge has yet to identify the ice-cream seller and the man who recorded the video. Also, it is not clear if the seller has ties to the Gulen movement or not.

VD: But, I found out that you are FETO supporter and I changed my mind.

IS: It is OK. I can treat you with free ice-cream

VD: Aren’t you embarrassed for wearing this ‘Turkey cap’ and selling Maras ice-cream as you are dishonoring Maras’ reputation?

VD: Don’t you feel guilty? Do you think I am gonna eat the thing you would give me? You guys killed 250 of our fellow citizens. You will live like dogs in those foreign countries, like dogs. Dirty F..O supporters.

IS: Come on, get out of here

VD: You are still not ashamed of wearing this Turkey cap, are you?

IS: Come on, get out of here

IS: How do you know that I am a terrorist?