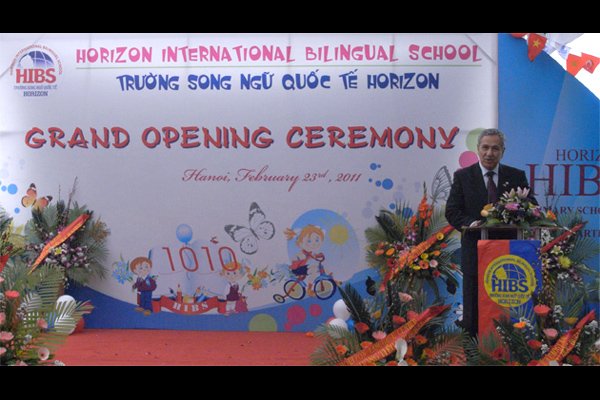 Horizon International Bilangual Schools, founded in 2002, in Vietnam, opened its 5th campus. Deputy Prime Minister of Turkey Mr. Bulent Arinc cut the ribbon at the opening ceremony of the new school, which is K through 5th grade.

Bulent Arinc, minister of state and deputy premier, paid an official visit to the Far East including Vietnam and Cambodia. Arinc, opened Zaman University in Cambodia on Sunday. Then, he opened 5th campus of Horizon Bilingual International School in Hanoi, Vietnam. At the opening ceremony Arinc said that the new school, like the others, would give a quality education and the graduates of it would build the future of the country. Arinc also underlined that there were other schools in Ho Chi Minh and all of these schools had been honor of Turkey.

The deputy premier Arinc wished a successful educational life to the students and the teachers of the new Horizon school in Hanoi. He said that Turkey and Vietnam had a common point in the past as being occupied and fighting for independence. He underlined that the graduates of Horizon schools would be bridge of friendship between the two countries. He expressed his pleasure for Turks’ contribution to the education in Vietnam and serving the peace in the world with Vietnamese friends.

Bulent Arinc celebrated the New Year of Vietnamese citizens. He listened to his favorite Turkish song from a Vietnamese student and watched the traditional Dragon Dance, which is believed to bring luck.

Source: Zaman Newspaper. Original news is in Turkish. IDC members made the translation.