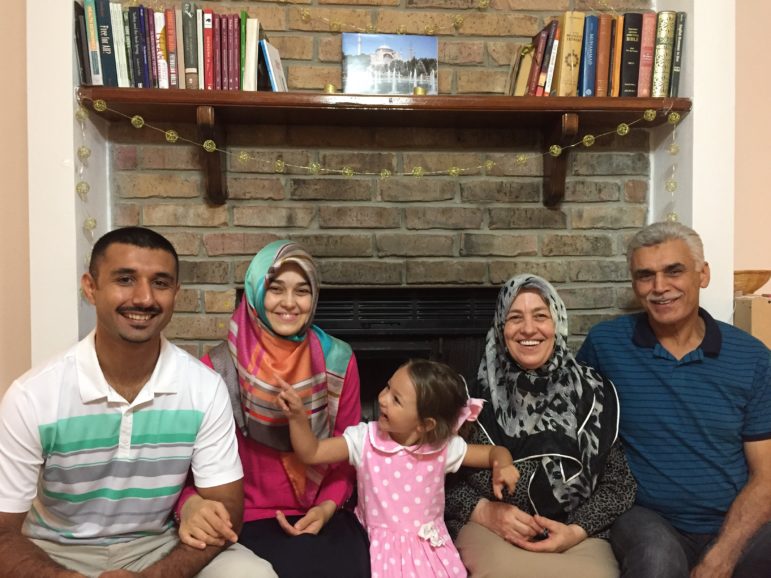 Gültekin and Merve Göllü, with daughter Zeynep, flew Merve’s parents, right, to safety in New Orleans after the Turkish coup attempt in July.

Even with a presidential candidate ignorantly spewing anti-Muslim diatribes and vowing to ban migrants — even tourists — native to parts of the Near East, grim recent developments in Turkey can seem at a far remove from New Orleans.

Like other members of New Orleans’ small Turkish community, a close friend of mine named Gültekin Göllü, a research fellow in economics at Tulane, has been paying anxious attention to his homeland following the failed military coup last July.

For Turkish President Recep Tayyip Erdogan, the coup provided the pretext for a vicious crackdown on his enemies, real and perceived, a chance to consolidate his power. Tens of thousands of Turks, in both civilian and military ranks, have lost their jobs or been jailed, press freedoms have been sharply curtailed and the president is seeking extradition of a former supporter of Erdogan’s early pro-democracy policies now in the U.S, Muhammad Fethullah Gulen.

Gulen, 77, who lives in self-imposed exile in Pennsylvania, inspired anti-extremist Muslims worldwide to initiate an inclusive movement called Hizmet. It benefits schools, charities, media outlets, healthcare facilities, relief services, and businesses in Turkey and in more than 160 other countries. Gültekin, like many Turks in the New Orleans area, is a supporter of Hizmet.

And so it was that within days of the aborted coup, Gültekin’s wife, Merve, was on a Skype call from New Orleans to her 60-year-old parents in Turkey, all but screaming at them to get out. In the past year, Merve’s father’s small shop had been attacked because of his association with Hizmet. Merve’s mother mentioned attending a women’s social gathering, a charity event to assist students. One woman who stepped up to help was stopped by another. “We won’t give these Gulenists even water,” she snapped.

Even close friends had cut off communication — and here was Merve’s mother saying all she could think to do was plan to carry on with her life as usual, tomorrow and the day after that.

Gültekin recaps his wife’s response: “What! Forget about plans for tomorrow, Mom! There is no tomorrow for you in Turkey! You are packing up now! We are buying the plane tickets and you are coming here tomorrow!”

As Gültekin puts it, their arrival in New Orleans has meant “leaving behind not only furious Turkish President Erdogan and his ruthless witch hunt against them, but also their belongings, including their house, car, and a refrigerator full of food.” Two days after they left, Erdogan filed a legal case against these elderly, law-abiding, citizens for the crime of being on the board of an educational institution.

Merve’s parents arrived in New Orleans dazed by the trauma and speed of homeland events, but relieved to be with family, including their 3-year-old granddaughter Zeynep. What happens from here — and for Gültekin’s parents, who must also ponder their options — remains uncertain.

I had no clue all this was in the offing when I got off a plane in Istanbul in 2012 as part of a tour. It had been arranged by the Atlas Foundation, which promotes intercultural travel and dialogue in the belief that it’s the road to shared understanding and the abatement of intolerance and religious extremism.

Inspired by Gulen, the exiled imam, the Atlas Foundation of Louisiana was established in 2002 by Turkish-American volunteers and businessmen, with the help of Cathie Eustis, a Roman Catholic. Like Gulen — who is pro-democracy and convinced that government should be secular, not theocratic — Hizmet volunteers try to remain alert to the needs of the community in which they live, and pitch in to help whenever they see a way. 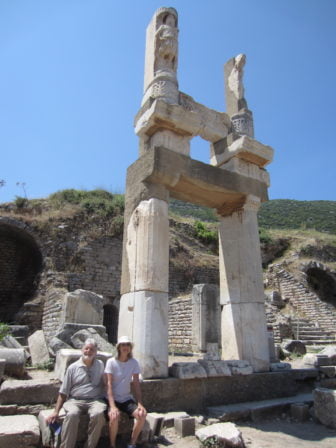 From the airport, we were whisked off by our knowledgeable  and ever-cheerful guide, Emrah Aktepe. He took us to a comfortable residential hotel. We shared common rooms and kitchens with young girls from Africa attending a Hizmet summer school downstairs.

There our adventure began. We visited Topkapi Palace, the Blue Mosque and all the major attractions, including the small house/chapel where the Virgin Mary is said to have spent her last days. We were welcomed into the offices ofZaman, Turkey’s biggest daily — since then seized and shut down by Erdogan.

We had dinner with a Turkish family in Kayseri on a balcony overlooking the city at sunset. The grandfather showed us his meticulously tended garden of tomatoes, peppers, and herbs.  Ilknur, an 11-year-old, had made a sign for the entrance: “Welcome to the Turkey.” I got to sit next to her at dinner, and she practiced her English with skill and charm.

What a difference four years make! Like the newspaper, the universities we visited have been shut down. Hizmet volunteers, their families and their friends are exiled or in jail. What has become of Ilknur and her family? Atlas has had to call off their tours, which could not have been more hospitable, safe and culturally enriching. Turkey is in the grip of violence not seen for decades.

After the military’s failed attempt to regain control of the government, Erdogan blamed Gulen, though there is no evidence that the aged imam even knew about the impending coup. When we were in Turkey in 2012, Gulen and Erdogan were public allies. But now Erdogan is calling Hizmet a terrorist organization as he seeks Gulen’s extradition and punishment.

Sezgen Tanrikulu, an opposition parliamentarian, accuses Erdogan of going beyond Gulen and Hizmet to “fabricate thought crime and collectively punish people” as a way of wiping out any or all suspected enemies.

Gültekin, meanwhile, remains keenly attentive to the tragedy unfolding in Turkey. In a recent article, appealing for  international intervention to prevent Turkey’s accelerating slide toward dictatorship, he reported that since the coup, 32,000 people have been detained. The number has since risen to 72,000. Tens of thousands of teachers, soldiers, police officers, judges, university deans, and prosecutors have lost their jobs.

Erdogan’s tentacles extend all the way to New Orleans and to friends of Gültekin — most of them Hizmet volunteers.

The one we’ll refer to as “F” was an exchange scholar at UNO. A government employee finishing up his doctorate, he had a job offer from a public university in Istanbul. No more. Blacklisted by Erdogan, he lost his government post and his place in the doctoral program. Today he and his wife, a journalist, would be forbidden to leave Turkey and possibly jailed. So here they are in New Orleans – these two highly educated and competent people – trying to start over.

“H,” an exchange scholar at LSU, was a year away from retirement.  Sacrificing job and benefits, he decided to stay here when he learned he was on Erdogan’s blacklist. But his wife and son in Turkey begged him to come home. After an agonizing three weeks, he joined them, only to be arrested. Gültekin doesn’t know where he is now.

S” left Turkey just days before Erdogan banned academics from leaving. He had worked for a university established by Hizmet volunteers. He hastily sold his house and car and went to Bosnia, forfeiting his senior associate professorship and his social security. But Bosnia has uncomfortably close ties with the Turkish government, so he wants to move to New Orleans.

I shudder to think that these educated, able and socially conscious people have been yanked so painfully from their roots and the fruits of their careers.

And how appalling that they should now be exposed to the atrocious anti-Muslim diatribes of a U.S. presidential candidate not all that different from Erdogan in his threats and his bigotry. Bear in mind that these people, so urgently and deservedly in need of asylum, are precisely the refugees from Muslim lands that a President Trump has threatened to ban.

We New Orleanians who are members of Atlas will do everything we can to embrace and help our Turkish Muslim friends. We are indeed blessed, inspired, and humbled by their presence. If I could extend just a fraction of the hospitality I felt from Hizmet volunteers in Turkey, I would thank the Holy Spirit – revered, by the way, in both Christian and Islamist traditions.

Our bonds of friendship with Turkish Muslims have grown in the four years since the trip. We’ve celebrated holidays together, worshiped together, visited in each others’ homes, studied and cooked, watched movies and read books together, played with each others’ kids. We’ve gone to the beach and played tennis. I’ve read some of Gulen’s books and developed a deeper appreciation of my Christianity by studying the Koran.

Chaos in far-away countries used to seem remote to me. Not any more.

Orissa Arend is a psychotherapist, mediator, and writer in New Orleans. Gültekin Göllü is an economics research fellow at Tulane University.