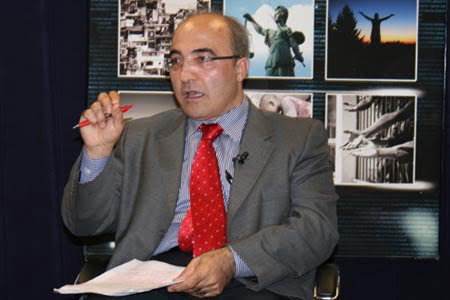 University of Utah professor of political science Hakan Yavuz, Ph.D, gave a lecture followed by a conversation on his latest book “Toward an Islamic Enlightenment: The Gulen Movement“. At the lecture hosted by Rumi Forum Washington D.C., Yavuz argued that the Gulen Movement should not be considered a religious movement, rather, a civil society movement. He underscored that he offers a comprehensive study of the movement in his book and, further in his presentation, focused on the motive alongside message of the book and the aspects of the movement he considered worthy of mentioning.

Yavuz, who has had a particular focus on Islamic movements in Turkey throughout his academic career, dedicated the greater part of his thesis to this phenomena. In 1990s, he did extensive research and examined the evolution of the Gulen Movement. He said there have been a number of institutions conceptualizing the movement but he was not satisfied with their work. His motive, therefore, for authoring this book is his belief that the movement is misunderstood and to explain the behaviors of the movement members. “What made me write this book is, first, the misunderstanding of the movement both in Turkey and outside. Second, somewhat, the inability of the movement members to explain what they are doing. Because the movement is very much action-oriented movement” Yavuz said.

Highlighting the fact that he wrote the book with a scholarly approach as an outsider, Yavuz said “The Gulen Movement is one of the recent interpretations of Islam. I would say, most powerful and most successful one that tries to reconcile with modernity in general, democracy, human rights and market economy.” He referred to the movement’s interpretation as “New Islam”. And speaking of the defining characteristics of this new understanding, namely, ‘New Islam” Yavuz said, “In it, the piety is not for the sake of piety. It is for the sake of improving social, political and economic condition of your society. So, here piety becomes a motivating force not just fulfilling your religious duties”. Additionally, he underscored that he regards the movement as a civil society movement rather than a religious organism. He went on to say Islam in the conceptual map of Gulen is a civil philosophy, which suggests Gulen wants to integrate Muslims into public debate. “For Gulen to build a consensus shouldn’t be left to one or two religious scholars. Islam provides a shared code of language and it offers a general sense of good life” he said.

Speaking of the movement’s objective the professor said, “Everybody is asking what the movement’s purpose is. I don’t think it is religious. Based on my studies I can suggest that its main objective is character formation, which is one of the reasons why education is significant in the movement.” In addition, as his analysis of the movement terminology indicates, he said, action precedes preaching in the methodology of the movement. “Action, activities and building institutions become much more important than preaching religion” said Yavuz. As for what the concept “dialogue” refers to in the movement, he commented that Gulen and the movement, by bridging different cultures and societies, stress bridging more than bonding.

Yavuz further brought up the inner dimensions of Islam in Gulen’s understanding. Referring to Gulen’s account of his own childhood and religious background which was largely shaped by his mother and grandmother, Yavuz claimed that Gulen feminized the notion of Islam. “Gulen believes sentimental and emotional aspects of Islam are essential in terms of action and activity” which is instilled by mothers as Yavuz argued.

Noting that his book includes parts critical of the movement, Yavuz listed his criticisms as; disappointingly low women involvement despite being better that other movements with regard to women issues, failing to be as transparent as expected and its increasing interest in politics following Ergenekon case from 2007 onwards.

2013 Annual Peace and Dialogue Awards by the Chicago-based Niagara Foundation were presented to their honorees at an event on September 16th in University Club of Chicago, a historic building of the city. At the ceremony emceed by Rob Stafford of NBC 5, the awards were given in the categories “Commitment”, “Public Service” and “Fethullah Gulen Award.” […]