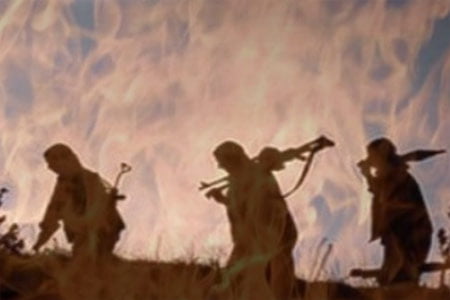 Kurdish intellectuals have joined critics of a suspected outlawed Kurdistan Workers’ Party (PKK) attack on a building, which hosts a private university prep course in Şırnak on Saturday, saying the masterminds of such attacks will not achieve their goals.

The building, where weekend and evening courses to assist students preparing for national exams are held, was attacked by an unidentified person with a Kalashnikov rifle in the district of Cizre on Saturday, leaving a security guard wounded.

The attack occurred on the premises of a FEM school late on Saturday as students were leaving an evening lecture. Eyewitnesses told the Cihan news agency that the attacker was a man wearing women’s clothing who shot randomly at the building with a Kalashnikov rifle. While no one was killed in the attack, a security guard sustained a shoulder wound and was immediately taken to a hospital. The PKK, which has waged a bloody war in the Southeast since 1984, is believed to have been behind the attack.

Orhan Miroğlu, a Kurdish intellectual and writer, said through attacks like the one on Saturday, the PKK aims to create the impression that it is the dominant power in the region, but that this is misleading.

“Every such attack shows that people of this mentality are increasingly being cornered and that their world gets narrower,” he said, calling on the Peace and Democracy Party (BDP) and nongovernmental organizations in the region to raise their voices against the PKK.

According to Ümit Fırat, a Kurdish intellectual and writer, the PKK does not want any other group to have influence in the region, which is why it attacks institutions like the FEM school, which was established by volunteers from the Hizmet (Gülen) movement.

İbrahim Güçlü, another Kurdish intellectual, told Today’s Zaman that it is out of the question to approve of attacks like the one on Saturday.

“Through acts of violence, you can only damage Kurdish rights and freedoms. You should abandon these actions and act with common sense. Kurds should act by saying ‘stop’ to these attacks,” said Güçlü.

The reason for Saturday’s attack, according to Kurdish intellectual Esad Canan, is to scare the Hizmet movement, damage stability in the region and stir tension.

Cizre FEM school Principal Fahri Koca held a news conference with respected opinion leaders and representatives from nongovernmental organizations on Monday where he said he will not condemn those behind the attack but hopes God shows them the right way.

“We are determined to live in line with the values we believe in and promote love and brotherhood,” Koca said.

He said the attack on the Cizre FEM school came at a time when the most successful students in Şırnak — according to the recently announced results of the Transition to Higher Education Examination (YGS) — took this course.

Abdullah Demir, the leader of the five biggest clans in Şırnak and who spoke at the same news conference, said the bullets fired at the FEM building were actually fired at the future of Şırnak.

Justice and Development Party (AK Party) Şırnak deputy Mehmet Emin Dindar described the attack as “inhumane,” noting that the goal of this attack is to ensure that Şırnak’s youths do not have access to education.

“The goal of such attacks is to ensure that people in Şırnak remain ignorant and cannot differentiate between good and bad,” he said.