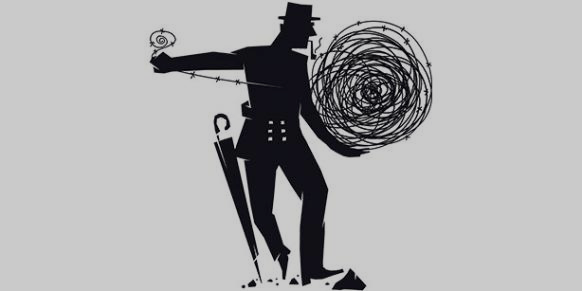 The Justice and Development Party (AKP) government has taken a huge step toward making the state stronger by adopting a bill that restructured the national intelligence agency.With this move, we are about to become a security and intelligence-oriented state, thanks to the AKP. Imagine, we now have a law that creates an unquestionable intelligence organization that is now allowed to watch the public, collect any information it needs from them, establish contacts with a terror organization without prior permission or authorization, send its agents to be involved in clandestine transactions, stay outside the jurisdiction of the courts and avoid press attention and coverage.

Basically, the legislation categorically denies the idea that people have inherent rights at birth. This is also a law that makes extraordinary measures ordinary and justifies unconstitutionality in some cases. This means that the AKP is trying to create a Turkey where its own partisans and supporters and its intelligence agents and security units are free, but all others enjoy freedom as a rare exception. But I should note that the AKP government decision to turn Turkey into a security and intelligence-oriented state was not a surprise because it had already displayed signs of taking raison d’état as its reference in ruling the country. I should also note that this idea of creating a security state is not limited to the AKP. As a fundamental code, raison d’état is the common denominator for almost all political parties in Turkey and for the state tradition in this country. If we understand this, we also understand Turkey. I have always drawn attention to this in my speeches and articles, but it is generally neglected in the literature.

I already noted that the AKP’s reliance on raison d’etat did not surprise me because this notion is fairly consistent with the conservative worldview of the AKP. In a certain version of the conservative political thought that the AKP also endorses, the state is both a key concept and a fundamental value. In such statist conservatism, there is no room for a society independent from the state, because, from this perspective, the state is the existential source of the society and is the political embodiment of the wisdom believed to be enshrined in tradition.

This approach also associates the state with society and suggests that the state represents the will and unity of society. Under this approach, the survival and unity of society depend upon the consolidation of state authority and the empowerment of state institutions. In this way, the survival of the state is associated with the strength and efficiency of the state. Even though there is another version of conservative thought that places less emphasis on the state and promotes a civilian approach, this version remains pretty weak in the conservative thought and practice infected with statist views in Turkey.

Civilian conservative thought regards civilian institutions as intermediary structures instead of sanctifying the state and reflects a perspective that considers individuals and groups part of society rather than the state. The Nur movement founded by Said Nursi, the Hizmet movement inspired by Turkish Islamic scholar Fethullah Gülen and, to some extent, the Süleymancılık community initiated by religious and spiritual leader Süleyman Hilmi Tunahan, are the social groups that are closest to this category among conservative circles. Conventional religious orders that seem to be civilian move away from this category as their Sufi tendencies become more visible. On the other hand, it is also hard to consider some other religious groups and orders that rely on the state or are ready to cooperate with it as elements of civil society, because the most fundamental aspect of a civil society group is its ability to create institutional structures to perform activities and fulfill the group’s goals independently of the state.

To this end, it is possible to argue that the most important civil society movement in the conservative segment of society in Turkey is the Hizmet movement. Even though it is not completely free of the statist and nationalist tendencies of traditional conservatism, this movement resembles Western civil society groups and organizations in terms of creating public discussion platforms and performing education and unity-related activities. In addition, what makes the movement more important is that it does not depend on the state in order to survive and sustain its effectiveness. Despite the fact that the identity of those who control the state has changed over the last two decades, the state’s determination to eliminate this movement remained the same; this could be attributable to the civilian nature of the movement. In fact, intolerance of civilian initiatives that are able to remain independent is an inherent attitude and style of the raison d’état approach in Turkey.

As for the AKP, despite it appearing to act differently in this regard in the beginning, the party is now apparently a statist actor that is the representative of statist rather than civilian conservatism. In fact, we have seen eagerness in this regard in its attitudes and initiatives to impose “national and religious values” upon all social segments whenever it could seize an opportunity to do so. The AKP now seems to have returned to its original codes; consistent with the National Outlook (Milli Görüş) tradition, this party has moved to a statist-conservative line and approach. In addition, the AKP is determined to keep this pro-statist approach because it also inherited the imperialist ambition and religious conservatism of the National Outlook tradition. These are all consistent with the mentality of raison d’état.

* Mustafa Erdoğan is a professor of constitutional law and politics and also dean of the İstanbul Commerce University Faculty of Law.

İHSAN YILMAZ  18 May, 2012 When we look at the recent discussions and debates surrounding the Hizmet (Gülen) movement especially in the Turkish media, I observe that some writers are inclined to see the movement composed of a few relatively autonomous groups with sometimes clashing visions and practices. I do not think that behind this […]