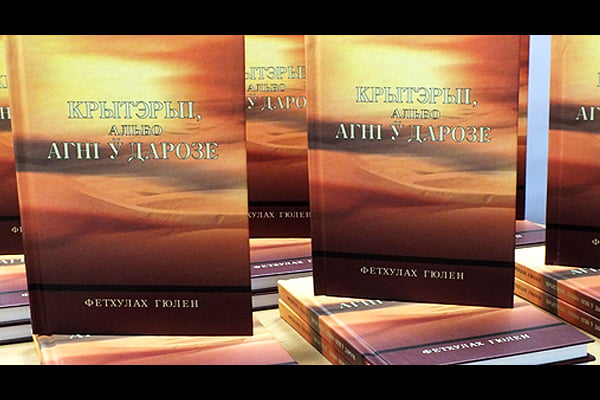 The book and its Belarusian version were recently introduced to Belarusian academics and scholars at a conference titled “Dünya Edebiyat Sürecinde Türkiye ve Belarus” (Turkey and Belarus in the Course of World Literature). Sergey Garanin, deputy head of the Language and Literature Institute at the National Academy of Sciences of Belarus, spoke at the conference and said Belarusian readers are now able to access a book containing Gülen’s teachings. “There is no doubt that Belarusian and Turkish people have stronger harmony and friendship after the translation of Gülen’s book into the Belarusian language,” he stated.

Garanin also defined Gülen as a scholar who wishes to build bridges between different religions and cultures through dialogue. “Gülen’s efforts are aimed at creating an atmosphere of tolerance in the world,” he added.

Gülen has written many books on a variety of religious and Islamic topics that attract a large number of readers from all around the world. In order for the books to reach even more readers, they have been translated into a variety of languages, including Spanish, Russian and English. Gülen has also pioneered educational initiatives in a number of countries, along with efforts to promote intercultural and interfaith activities around the world.

One of the world’s most influential Islamic scholars, Gülen topped the list of “The World’s Top 20 Public Intellectuals” of Foreign Policy and Prospect magazines in 2008.

For some months, the PKK has misinterpreted the remarks of Gülen regarding the solution to Turkey’s long-standing Kurdish problem and is using manipulation tactics similar to those employed during the military intervention of 1997 against Gülen movement. 9 January 2012 / TODAY’S ZAMAN, İSTANBUL Well-respected Islamic scholar Fethullah Gülen has said the outlawed Kurdistan Workers’ […]