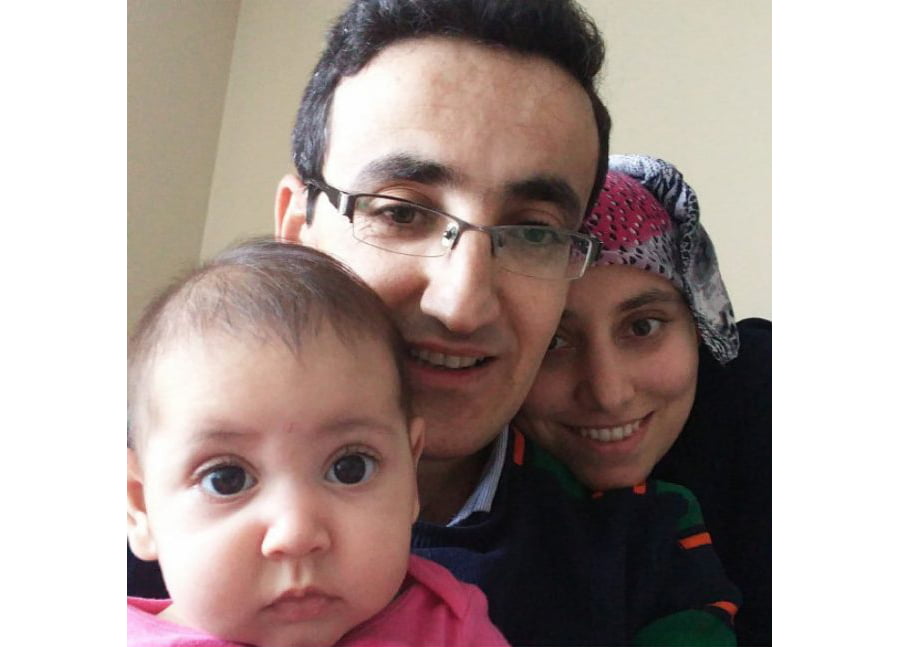 Queen's University student Inan Korkmaz, seen with wife Yasemin and daughter Asli Mina, was granted asylum in Canada in March based on his claim of political persecution by Turkey's regime.

Shortly after the attempted coup last July against Turkish President Recep Tayyip Erdogan’s regime, Inan Korkmaz found out from an online government decree that his government scholarship had been cancelled.

The Queen’s University computer engineering student also learned his educational credentials would not be recognized in Turkey because he was “connected” with the F..O — short for “Fethullah Gulen Terrorist Organization,” which is how the Turkish government refers to the movement it claims was behind the July 15 coup.

Asylum claims have spiked in Canada and some here say they feel threatened by President Recep Tayyip Erdogan’s purge of thousands of people linked to the Gulen Movement, blamed for a failed 2016 coup.

With his postgraduate studies and status in Canada in jeopardy, Korkmaz went to the Turkish Embassy in Ottawa for assistance. Instead, officials there seized his passport, according to his asylum claim filed in January.

“The government shut down my bank account and my family couldn’t send money to help me,” said Korkmaz, 29, who came to study in Canada in 2011 on the scholarship and was granted asylum in March.

“They said my name was given by the intelligence service in Turkey. Unfortunately, they couldn’t do anything for me and must take away my passport,” he said. “I’m not political or anti-government. I’m innocent. Everyone is so afraid of this regime. I am so worried for my family in Turkey.”

In the aftermath of the failed coup — and the subsequent purge of thousands of workers accused of being dissidents — Canada has seen a spike in asylum claims from Turkey. The 55,000-strong Turkish-Canadian community has also become increasingly polarized, with distrust and accusations of witch hunts against anyone deemed to be a sympathizer and supporter of the so-called Gulen Movement.

Erdogan has blamed the bloody attempted coup on Fethullah Gulen, a U.S.-based former cleric billed as the spiritual leader of a movement that promotes a tolerant form of Islam, altruism and education.

According to the Immigration and Refugee Board, the number of refugee claims from Turkey almost quadrupled last year, to 1,106 from just 303 a year prior. Some 82 per cent of the claims were accepted, compared to the 63 per cent average for all refugees.

Mehmet Caman, a visiting political science professor at Newfoundland’s Memorial University, has tried to avoid the turmoil back home after he said he received a letter earlier this year from his boss at a Turkish university saying he was under investigation.

Caman, who has extended his sabbatical in Canada, said the dismissals and arrests of thousands of judges, public servants, journalists and academics in Turkey seem to be part of a “political purge.”

“We have a president as the head of the state who, de facto, has the entire power and control of the country. With the takeover of power, the constitution is no longer valid. There’s no rule of law in Turkey now,” said Caman, who taught in Germany for 15 years before coming here in 2015.

“There have been many reports of certain individuals being denied services like applying for power of attorney and birth certificates for their newborns here in Canada. These irregularities have never been seen before in the last 20 years. It is an uncomfortable situation for everyone in the community.”

Turkey’s ambassador to Canada, Selcuk Unal, said he could not comment on the specific allegations against his government but felt “some people” are trying to take advantage of the political situation in Turkey for asylum.

“Any person wanted and searched by the home authorities, we ask questions to the person. It is the same for every country,” Unal told the Star in an interview, denying the allegations of political purges levelled against the current Turkish regime.

“This issue about this terrorist group is real. They have infiltrated in different private and public institutions. We have detained 70,000 alleged members of the group but 25,000 of them have been cleared after investigations.”

Unal also played down the divisiveness within the diasporic community in Canada as a result of the failed coup, and the impact of the April referendum that has expanded the powers of President Ergodan’s office.

“In any democracy, there are different opinions. We had 51.5 per cent of people voting for the constitutional changes and 48 per cent of people against it,” said Unal. “It’s same for the Quebec (separation) referendum. Differences in and outside of Turkey are normal.”

The Nile Academy, a “Gulen-inspired” private school in Toronto, has blamed the crackdown on Gulen followers for its falling enrolment after the 2016 attempted coup.

“We registered more than 200 students from Turkey for September. Almost everyone withdrew their registration,” said a spokesperson for the school, who asked his name not be used for fear of repercussion.

“Some of the families were not in a good financial situation because of the political condition. Some had their passports and visas suspended by the government. Others decided to attend other private schools because they were afraid our high school diplomas are not going to be recognized.”

In April, some Toronto MPs received an email from a person identified as Ayesenur Dereci, who said she represented the Canadian Youth & Education Foundation (CAYEF), a non-governmental Turkish organization in Toronto with a mandate to “raise respectful youth to its national and spiritual values.”

“I would like to bring to your kind attention a flyer regarding an event on April 9 Sunday at Montecassino Hotel in Toronto,” said the email from Dereci’s CAYEF address that was obtained by the Star.

“I would like to inform you that this event has no relationship with the Turkish Canadian Community or the wider Muslim community. The organizers are directly linked with Fethullah Terrorist Organization (FETO) who are the perpetrators of July 15 coup attempt in Turkey.”

The email also requested that recipients not attend the event.

Toronto MP Rob Oliphant (Don Valley West) said he is aware of concerns raised by the Turkish-Canadian community at meetings he has attended.

“I understand people do bring their interests, concerns and passion from their country when they come to Canada, but this is not the place to play out these conflicts in another country,” said Oliphant. “These conflicts need to stay in that country.”