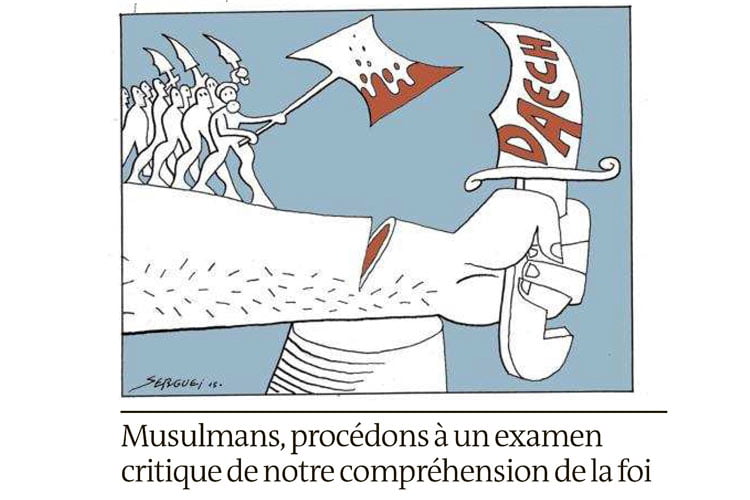 Muslims, we have to critically review our understanding of Islam

Words fall short to truly express my deep sadness and revolt in the face of the carnage perpetrated by terrorist groups such as the so-called ISIS. I share a profound frustration with a billion and a half Muslims around the world at the fact that such groups commit terror while dressing up their perverted ideologies as religion. We Muslims have a special responsibility to not only join hands with fellow human beings to save our world from the scourge of terrorism and violent extremism, but also to help repair the tarnished image of our faith.

It is easy to proclaim a certain identity in the abstract with words and symbols. The sincerity of such claims, however, can only be measured by comparing our actions with core values of our self-proclaimed identities. The true test for belief is not slogans or dressing up in a certain way; the true test of our beliefs is in living up to core principles shared by all major world faiths such as upholding the sanctity of life and respecting the dignity of all humans.

We must categorically condemn the ideology that terrorists propagate and instead promote a pluralistic mindset with clarity and confidence. After all, before our ethnic, national or religious identity comes our common humanity, which suffers a setback each time a barbaric act is committed. French citizens who lost their lives in Paris, Shiite Muslim Lebanese citizens who lost their lives in Beirut a day earlier and scores of Sunni Muslims in Iraq who lost their lives in the hands of the same terrorists are first and foremost human beings. Our civilization will not progress until we treat the suffering of humans regardless of their religious or ethnic identity as equally tragic in our empathy and respond with the same determination.

Muslims must also reject and avoid conspiracy theories, which have so far only helped us avoid facing our social problems. Instead, we must tackle the real questions: do our communities provide recruitment ground for groups with totalitarian mindsets due to unrecognized authoritarianism within ourselves, domestic physical abuse, neglect of youth, lack of balanced education? Did our failure to establish basic human rights and freedoms, supremacy of the rule of law, and pluralist mindsets in our communities lead those who are struggling to seek alternative paths?

The recent tragedy in Paris is yet another reminder for both theologians and ordinary Muslims to strongly reject and condemn barbaric acts perpetrated in the name of our religion. However, at this juncture, rejection and condemnation are not enough; terrorist recruitment within Muslim communities must be fought and countered by an effective collaboration of state authorities, religious leaders and civil society actors. We must organize community-wide efforts to address all factors that aid terrorist recruitment.

We need to work with our community to set up the necessary framework for identifying at-risk youth, preventing them from seeking self-destructive paths, assisting families with counseling and other support services. We must promote a proactive, positive government engagement so that engaged Muslim citizens can sit at the table where counterterrorism measures are planned and share their ideas. Our youth should be taught ways of expressing support and dissent within democratic means. Incorporation of democratic values into school curricula early on is crucial for inculcating a culture of democracy in young minds.

In the aftermath of such tragedies, historically strong reactions have surfaced. Anti-Muslim and anti-religious sentiment as well as governments’ security-driven treatment of their Muslim citizens would be counter-productive. The Muslim citizens of Europe want to live in peace and tranquility. Despite the negative climate, they should strive to engage more with their local and national governments to help work toward more inclusive policies that better integrate their community into the larger society.

It is also important for us Muslims to critically review our understanding and practice of Islam, in the light of the conditions and requirements of our age and the clarifications provided by our collective historic experiences. This does not mean a rupture from the cumulative Islamic tradition but rather, an intelligent questioning so we can confirm the true teachings of the Qur’an and the Prophetic tradition that our Muslim predecessors attempted to reveal.

We must proactively marginalize de-contextualized reading of our religious sources that have been employed in the service of perverted ideologies. Muslim thinkers and intellectuals should encourage a holistic approach and reconsider jurisprudential verdicts of the Middle Ages that were issued under perpetual conflict where religious affiliation often coincided with political affiliation. Having core beliefs should be distinguished from dogmatism. It is possible, indeed absolutely necessary, to revive the spirit of freedom of thought that gave birth to a renaissance of Islam while staying true to the ethos of the religion. Only in such an atmosphere can Muslims effectively combat incivility and violent extremism.

In the aftermath of the recent events I witness, with chagrin, the revival of the thesis of the clash of civilizations. I do not know whether those who first put out such a hypothesis did so out of vision or desire. What is certain is that today, the revival of this rhetoric simply serves the recruitment efforts of the terrorist networks.  I want to state clearly that what we are witnessing is not a clash of civilizations but rather the clash of our common civilization as humanity with barbarity.

Our responsibility as Muslim citizens is to be part of the solution despite our grievances. If we want to defend the life and civil liberties of Muslims around the world, and the peace and tranquility of every human regardless of their faith, we must act now to tackle the violent extremism problem in all its dimensions: political, economic, social and religious.  By setting virtuous examples through our lives, by discrediting and marginalizing the extremist interpretations of religious sources, by staying vigilant toward their impact on our youth, and by incorporating democratic values early in education, we can counter violence and terrorism as well as totalitarian ideologies that lead to them.

Note: Fethullah Gulen’s original op-ed appeared on Le Monde in French. This is the translation of that article.