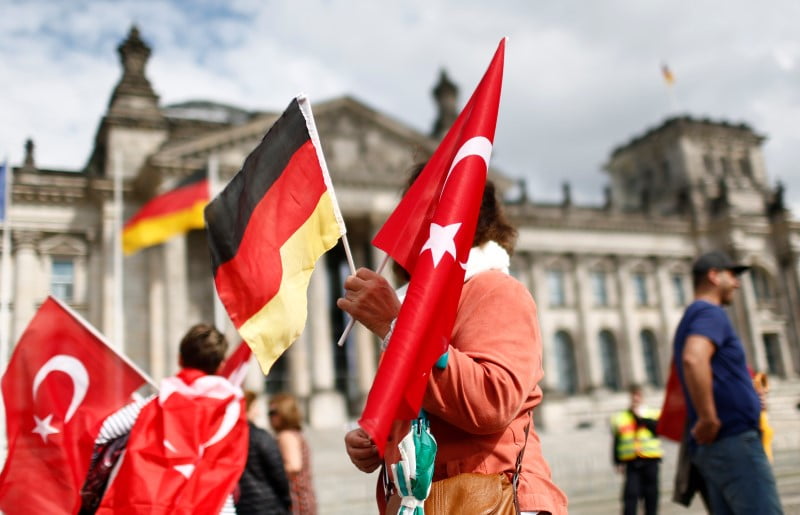 Murat spent six months in a Turkish prison, followed by a considerable time in hiding after his release. As soon as he could, he made good his escape to Germany.

As a trained lawyer and legal adviser to an influential association, he had a good life in his home country, living with his family in an upmarket area. But that was all before the failed coup of July 2016.

Murat says he was pursued because he took a stance as a lawyer against the undermining of democratic principles that accompanied the post-coup crackdown. The 43-year-old now has to content himself with a tiny flat near Cologne and has to rely on aid to support his wife, Selina, and their two children.

“We enter into contact only with people who have been passed on to us by those we trust,” Murat says. “We avoid the long-established Turkish community in Germany, otherwise it would be impossible to avoid being betrayed to the government.”

“We are being given assistance by people who went through much the same thing before us and who are now integrated to some extent. They have set up a network for the new arrivals,” he says.

“There is a lot of solidarity,” say German-Turkish journalists Huseyin Topel and Fatih Akturk. Contacts are passed on, day-to-day assistance offered and guidance through German bureaucracy provided, Topel says. “The supporters could be people of Kurdish origin, opposition activists, people close to the Gulen movement and also business people, along with a lot of Germans,” he adds.

The networks find jobs for the refugees, suitable child day care centres and schools for the children. Money is collected and accommodation offered.

“We enter into contact only with people who have been passed on to us by those we trust,” Murat says. “We avoid the long-established Turkish community in Germany, otherwise it would be impossible to avoid being betrayed to the government.”

The lawyer sees many of his fellow Turks in Germany as being manipulated by the Turkish media.

“They seem to believe every word that Erdogan utters,” he says.

Since the failed coup, Turkish President Recep Tayyip Erdogan has cracked down hard on his opponents, suspending or firing around 150,000 civil servants. Some 50,000 people have been jailed.

The Turkish government insists that the movement founded by preacher Fethullah Gulen was behind the coup attempt. Gulen – who lives in exile in the United States – denies it.

“Suspicion is a fact that we have had to live with for the past two years,” says Selina, 40, who worked as a manager in Turkey. This feeling of being unable to trust others has pursued them to Germany.

“We were spied on, lost good friends, were informed on to the authorities as alleged Gulen supporters,” she says.

Her main concern is her oldest son, who is still completing his schooling in Turkey.

Canan, a teacher who now lives near Dusseldorf after fleeing Turkey sees things much the same way. He does not seek out contacts among “opposition circles” that have ended up in Germany. He has had considerable support.

Christian organisations helped him in the effort to gain recognition of his academic qualifications.

Akturk und Topel believe the networks of trusted assistants will long be needed in Germany, as there are no signs of political change in Ankara. The release of German-born Turkish journalist Deniz Yucel in February after a strong campaign in Germany has not changed anything, they say. Neither of them is prepared to risk a trip home to Turkey.

“Anyone expressing criticism of the government or government members is marked as a traitor,” Topel says. The two see their work as “unmasking with facts Erdogan’s scathing rhetoric, politics of symbolism and faked information in the conformist Turkish media.”

As many as 15,654 Turks have applied for asylum in Germany since 2016 and the number is rising constantly. The first two months of this year saw 1,429 applications, according to the immigration authorities.

The number of accepted applications is also rising, with a figure of more than 42 percent at the beginning of the year.

Many of the applicants are highly educated – doctors, civil servants, diplomats and business people are among them. Many are aiming to start a new life in Germany.

“After the Turks who came in over many years as guest workers, people from the more educated classes are now coming to Germany,” Murat says. “We’re ambitious; we aim to learn German and to support the economy here by giving something back, by starting businesses.”

Canan also says that he has made useful contacts and is progressing with the language. His aim is to stay. He describes Turkish democracy as “shredded” with the opposition living in fear and the country facing economic ruin.

“We aim to use our abilities here in Germany. We want to be of value to the country and its people,” he and his wife say. (dpa)