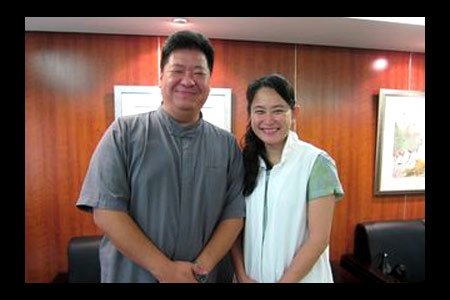 Two major earthquakes that struck 13 years ago far apart from each other, have brought two distant countries – Taiwan and Turkey – together on the path of humanitarian aid. “I was certain that my house was going to collapse,” Turkey-based Taiwanese businessman Faisal Hu recalled the night of Aug. 17, 1999, when a 7.6 earthquake hit Turkey, claiming tens of thousands of lives.

Rescue teams from all over the world rushed to Turkey to help save those trapped under the rubbles. But Hu said a feeling of spite began to grow in his heart when days passed and there were no reports of Taiwanese aid coming.

The Muslim said he later learned that the Buddhist Compassion Relief Tzu Chi Foundation, one of Taiwan’s largest charity groups, had sent a disaster assessment team from Kosovo to Turkey to assist with disaster relief on the second day of the earthquake.

Tzu Chi had donated prefabricated houses and 200 tents to the earthquake victims in Turkey, said Ferhan Merter, a member of Turkish charity Kimse Yok Mu (Is Anybody there?). Merter had assisted Tzu Chi in their earthquake relief at that time.

He told Cihan News Agency in a recent telephone interview in Istanbul that the two charities had since enjoyed close ties, visiting and learning from each other.

Just close to one month after the earthquake in Turkey, Taiwan suffered one of its deadliest temblors on Sept. 21, which left more than 2,400 people dead.

The Taiwanese volunteers in Turkey faced a difficult decision – stay in Turkey or go back to Taiwan, but they eventually decided to stay, said Hu.

The news was covered by Turkish daily newspaper Zaman, which said the volunteers who stayed in Turkey despite their own disasters back home were carrying out “true humanitarian aid.”

Hu said he believes helping others is helping oneself. Because of the experience it gained from the disaster relief work in Turkey, Tzu Chi was able to make a speedy entry into the disaster zones in Taiwan after the Sept. 21 quake and set up prefabricated houses in a short time, said Hu.

A rescue team composed of members from the Turkey government and volunteer search and rescue association AKUT also flew to Taiwan after the quake to assist with search and rescue work, he added, calling it “a circulation of goodwill.”

“It doesn’t matter if you come to Turkey, we go there (Taiwan), it’s like paying back to the community of the world,”said Cilasun Bayulgen, director of technical training at AKUT. Bayulgen was in Taiwan as a rescuer after the Sept. 21 earthquake.

That bond continues. Years later, Merter said, Kimse Yok Mu donated US$50,000 to help the victims of a 2009 flooding in Taiwan caused by Typhoon Morakot.

Hu said 817 and 921 were two previously unrelated set of numbers, but they have now connected the people of Taiwan and Turkey.

“There is a lot of sweetness in the painful memories,” he said.

Turkish businessmen extended a helping hand to the flood victims in the eastern Romania. The locals received the philanthropists who went door to door to deliver the relief aid, in tears. The flood two weeks ago that hit the Galati region in the eastern Romania devastated residences of thousands. The farmers’ grain harvest for the […]