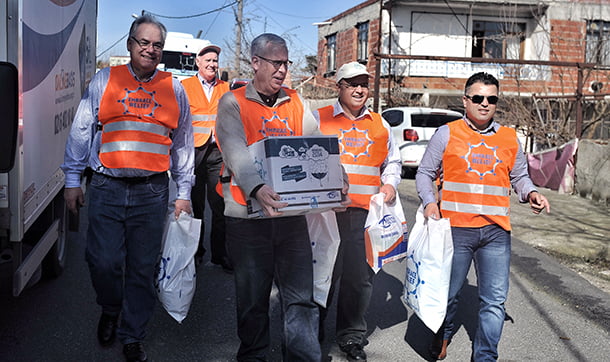 Now for the fourth time, Embrace Relief is organizing another campaign to assist Syrian refugees abroad, this time to Syrians in refugee camps in Iraq. We are asking our volunteers to bring new or gently used blankets and winter coats to one of the drop-off locations listed below between December 15th and December 20th. Winter clothing is also welcome, however, blankets and winter coats are in the highest demand.

The Syrian Refugees Blanket & Coat Drive campaign last year was a blast with approximately 40,000 blankets and 33,000 winter coats collected in over 100 drop-off sites all over the country. Our volunteers consisted of people from all walks of life; from college deans to elementary school students, from activists to Broadway set designers… They all came together for the single purpose of helping another refugee family somewhere.

Since the beginning of the Syrian civil war in 2011 which has left an estimated 400,000 people dead, Syrians have been trying to escape the tumult at home and trying to find a safe haven in a different land, especially in the neighboring countries (Turkey, Iraq, Jordan and Lebanon).

One of the biggest challenges these people face is the harsh winter conditions which make an already dire situation even worse. Having seen the troubles they’re facing with firsthand, Embrace Relief volunteers in the US have been collecting blankets and winter clothing for them for the last three years.

(Please ask yourself before taking your collections to a drop-off site: Would I use this item myself? If the answer is yes, then it’s good to go!)

Eleven designers came together at a recent charity event coordinated by fashion designer Esra Seziş and actor Taylan Güner. There, they made a unanimous decision that each designer would create three pieces for auction, the revenue from which would be donated to orphans in need. They called this pact Karınca Yuvası (Ant Nest). The intention was sincere, and the results were magnificent.