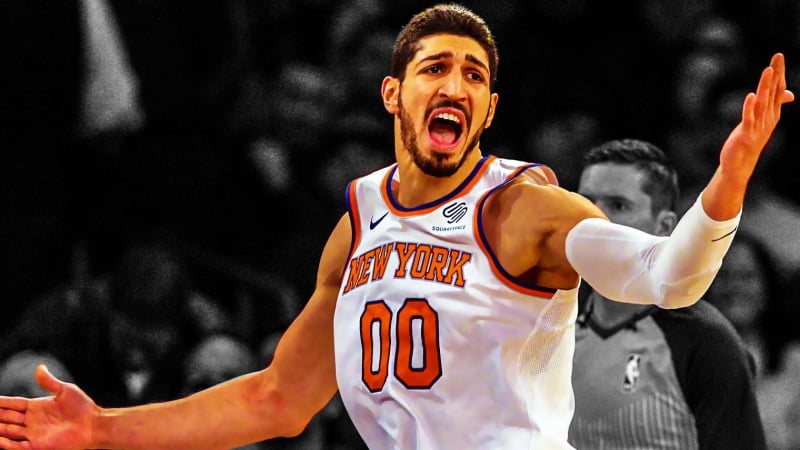 Kanter is an outspoken critic of Turkey’s authoritarian regime and a professional NBA basketball player for the New York Knicks.

This month, my dad will face trial in Turkey for “membership of a terror group.” He is a university professor, not a terrorist.

My father has been targeted for persecution by the Turkish government and its leader, President Recep Tayyip Erdogan, because of his association with me. I am a vocal critic of Erdogan’s dictatorial regime, and I’m a follower of Fethullah Gulen, a preacher and scholar whom Erdogan has deemed Public Enemy Number One. Because I play in the NBA, I am lucky enough to have a public platform, so I’ve used every opportunity to make sure everyone knows about Erdogan’s cruelty and disdain for human rights.

If you speak out against Erdogan, it can affect your whole life and everyone around you. It has been too dangerous for me to set foot in Turkey for three years. The last time I visited, the government destroyed my brothers’ school and threw my dentist and his wife in prison. The regime arrested and charged a man for links to Gulen after I took a picture with his child, and went after a comedian after he exchanged a few tweets with me. Last year, Erdogan canceled my passport and put out an international warrant for my arrest. That means I am now stateless and pretty much can’t leave the United States. It’s interfering with my career, too.

But far worse are the consequences it has had on my family. My siblings have been bullied in school. Our friends are too afraid to be associated with us. My father lost his job as a professor at a public university and now, if he loses the trial, he could face up to 10 years in prison.

I’m not a criminal or a radical. I’m not “dangerous.” I’m a human being with opinions and beliefs that I have a right to express. Erdogan does not respect that right in me or anyone else, and is willing to crush anyone who criticizes him.

Erdogan was a dictator-in-the-making for a long time, but things escalated after a coup attempt in July 2016. Erdogan blames Gulen and his followers for the coup. It is a crazy claim. I was with Gulen in his house in Pennsylvania that night, and he was as shocked and fearful for Turkey as the rest of us. We spent the night praying for our country.

Since then, Erdogan has used the coup attempt as an excuse to go after his political opponents and critics by targeting anyone with a perceived connection to Gulen—real or imagined. In two years, according to Turkey Purge, a website set up by a small group of young journalists that tracks the government crackdown, Erdogan’s government has arrested more than 80,000 people and detained more than 142,000. He has dismissed nearly 4,500 judges and prosecutors that he doesn’t agree with, a move that seriously weakens rule of law. He’s taken aim at free speech and press freedom by arresting 319 journalists and shutting down 189 independent media outlets. Turkey now has more journalists in jail than any other country. He is even going across international borders, persecuting supposed Gulenists in Turkmenistan, Malaysia, Kosovo, and more.

In some ways, it’s working. Without independent news outlets, and with social media under strict surveillance, it’s hard to get a real sense of what’s happening on the ground, and even harder to hear opposition voices. My friends and family have told me that I wouldn’t recognize the country anymore. They say people are unhappy and scared. They are struggling because the economy is in shambles—a direct result of Erdogan’s purge. I love my country and its people so much. As a follower of Gulen’s Hizmet philosophy, I believe in education, equality, and democracy. It pains me to see how Erdogan’s regime has forced the country into darkness.

People often ask me why I continue to speak out if it’s hurting my family. But that’s exactly why I speak out. The people Erdogan is targeting are my family, my friends, my neighbors, my classmates. I need to speak out, or my country will suffer in silence.

And I am lucky. When I became the target of the regime, the NBA and the U.S. government came to my defense and brought me back to safety, to a country where my rights are protected. I want to use this privilege to make sure the people of Turkey are heard.

So here it is: Five years ago, when Turkey was more free than it is now, thousands of Turkish people flooded the streets to defend our democracy over the bulldozing of a beloved park in Istanbul. On the first anniversary of the coup attempt, thousands marched to demand back their right to free expression, assembly, and political opinion. In April, they came out in forceagain to oppose changes that would allow Erdogan to continue ruling with impunity. And despite the risks in opposing Erdogan, the opposition candidatewon 30.6% of the vote in the snap presidential election in June.

What all of these people are saying is that the status quo just isn’t good enough. This is not what many of us want for our beautiful country. We want democracy and freedom. We want to be able to express our opinions freely and without fear. We want free media and a strong civil society. We want more.

In September, I’ll be attending the Oslo Freedom Forum in New York, presented by the Human Rights Foundation, to give voice to the silenced people of Turkey and to shed light on Erdogan’s crimes. Let’s all make sure to hold the world’s dictators accountable.

Kanter is a speaker at the Oslo Freedom Forum in New York on September 17, 2018.