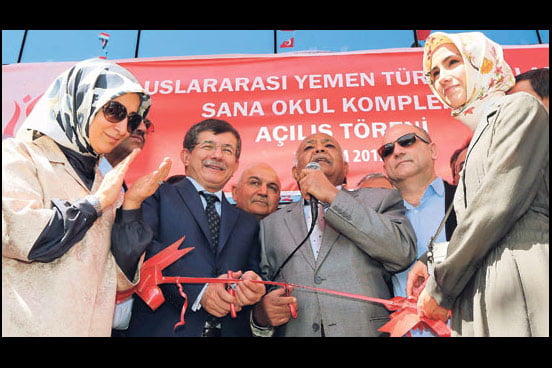 A Yemeni-Turkish School was opened Saturday in the Aser neighborhood of Sana’a in the presence of a slew of Turkish and Yemeni government officials. The school, which is largely a symbolic gesture of the continued friendly relationship between the two nations, was funded by Turkish businessmen and began construction in February 2011.

Prime Minister Mohammed Salem Basindawa also articulated his gratitude for the construction of the school. “Good things always come from Turkey, and it will continue,” he said. He reiterated the two nations’ close and friendly relationship. He also expressed hope that Yemeni schools would achieve the level of Yemeni-Turkish schools and said that they were looking forward to opening a Turkish university in Yemen.

Ahmet Davutoglu, Turkey’s Minister of Foreign Affairs, expressed his thanks to the businessmen who financed the educational school, the Turkish educators who came to Yemen in the name of development and those who facilitated the Turkish government’s role in diplomatic ties with the Arab nation. He asked the Turkish businessmen to open a Turkish university in Yemen.

Source: This news was compiled from Yemen Times and Today’s Zaman