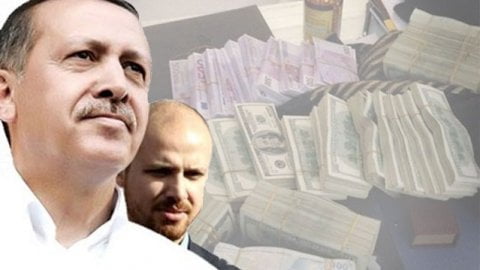 Hacked emails show a race to discredit an audio recording of Turkey’s leader telling his son how to avoid charges.

Hacked government emails, leaked and newly indexed by WikiLeaks, show that Turkey’s ruling party knowingly misled the public about previously leaked audio in which the country’s leader tells his son how to avoid corruption charges.

The emails come from the inbox of Berat Albayrak, Turkey’s energy minister, who happens to be the son-in-law of Recep Tayyip Erdoğan, the country’s former prime minister and current president. Though per its policy, WikiLeaks doesn’t reveal its sources, the Turkish Marxist hacktivist group RedHack had previously claimed credit for and leaked Albayrak’s emails.

At issue is the fallout from Turkey’s 2013 government corruption scandal, which led to the detention of more than 50 members of the ruling party, AKP. Despite December 2013 newspaper reports that Erdoğan’s son, Bilal, was named in a followup investigation, he wasn’t arrested. Two months later, a pseudonymous YouTube account uploaded a leaked audio recording of conversations between Erdoğan and Bilal to YouTube.

The recording is composed of five separate telephone conversations between Erdoğan and Bilal, and allegedly took place on Dec. 17 and 18, 2013. In them, Erdoğan instructs his son to move millions in stashed money away from their family house, fearing that the financial crimes unit that raided 47 AKP members and business workers, including sons of three ministers, and confiscated $17.5 million, would soon come for him.

After the leak, Erdoğan said the recording was “fabricated” and “montaged,” but quickly dismissed hundreds of police officers involved in the investigation. The probe was eventually suppressed after the prosecutors were removed and judges reshuffled.

Academics and sound engineers began to study the tapes in response to Erdoğan’s claims, and openly doubted they were doctored, save that it was five different recordings arranged sequentially. As renowned composer and audio engineer Attila Ozdemiroglu wrote:

“One can easily recognise if recorded talks were montaged from different sources, room sound and ambient noise changes, + I analyzed the recordings again. There are no montage other than adding the [five separate] conversations. One can understand this from the ambient noise.”

As shown in leaked emails sent to Albayrak’s address, AKP began a plan to sow doubt about the recordings the day after that audio was leaked. It commissioned two reports, respectively by John Marshall Media, an audiobooks producer in New York, and Kaleidoscope Sound, a small recording studio in New Jersey. Pro-government news sites described the two studios as “world-famous forensic labs” and cited their one-page opinions were to prove that tapes were montaged.

In an email sent near midnight of Feb.  27, 2014, the party’s foreign affairs deputy, Metin Kulunk, emailed a news article to be published by a government mouthpiece newspaper and website, Daily Sabah. The pro-government press followed suit. Daily newspaper Takvim, for instance, simply repeated that article, saying “Here is the report of that montage.”

Both studios, however, later said they’d been deceived by the AKP’s U.S. contacts. In a statement, Kaleidoscope Sound said a single staffer was paid $50 to give his opinion without knowing the true nature of the material. John Marshall Media described a similar situation, and its one employee contacted by the AKP, Robin Lai, was “misled and lied to,” as he wrote on Facebook. “Additionally, I am not a forensic audio specialist and only did a very ‘quick analysis,’” he wrote.

Over the course of their correspondence, Danismaz, who did not respond to request for comment, suggested various changes in the report’s content and language.

The analysts, Catalin Grigoras and Jeff Smith, from the University of Colorado Denver, provided a new report, which was again widely published on pro-government media as definitive evidence that the tapes were montaged. However, the published Turkish translation of the report differed substantially from the original English-language version, which simply stated that a sound recording downloaded from YouTube shouldn’t be used as definitive evidence.

This was more than enough for Danismaz, though. In a March 1 email also included in the WikiLeaks dump, he wrote to Albayrak, tacitly admitting the recordings’ authenticity by saying of the police officers thought to have recorded that conversation:

“If they claim that the tapes were authentic, they need to prove their authenticity. We should follow this argument in the press and social media. If they find the original recording, that means they would also reveal their own real identities. They would refrain from this. And as long as they run away, the tapes are ‘officially’ fake.”

An independent policy monitoring NGO in Turkey, Democracy Auditors, also reached out to American experts: Paul Baker and Elaine Guerra from Audio Forensic Services in San Francisco, for a forensic report of the recordings. Independent digital forensics expert Joshua Marpet also analyzed them and released his findings to the public.

None of the forensic reports supported Erdogan’s claim that his voice was montaged into the leaked tapes; if any, all three reports agreed that five sections of the audio file, on five different conversations, was consistent internally. But without an independent press or judiciary, the case was finally dismissed in October.

Only after the corruption probe was closed did Turkish news publish reports that police intelligence had collected audio recordings as genuine evidence. However, by then, Erdogan had already banned Twitter, been elected President, purged hundreds of police chiefs, and dismissed prosecutors.

Abant Platform`s workshop on “Australia-Turkey Dialogue” will be held in May 5-8, 2013 in Sky Tower Hotel, Akçakoca, Düzce (www.skytowerhotel.com) with participation of La Trobe University and Australian Intercultural Society. The Dialogue will lay the foundations of a relationship between scholars, policy-makers, and opinion leaders in both countries concerned with the future directions of these […]

Fethullah Gulen is a provincial Turkish preacher who has inspired a worldwide network of Muslims who feel at home in the modern world. The chief characteristic of the Gulen movement is that it does not seek to subvert modern secular states, but encourages practicing Muslims to use to the full the opportunities they offer. It […]