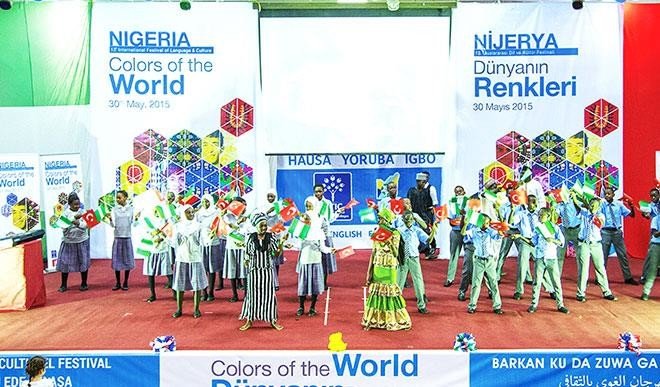 Children from different parts of the country took to the stage in Abuja for the 14th International Festival of Language and Culture.

In the beginning, the festival took place in Turkish local audiences nationally, but quickly the great reception among the population and the resounding success in the country resulted in global expansion.

The 2016 International Festival of Language and Culture which was held in different parts of the world, aims at sharing the value of love, peace and friendship among people of diverse languages and culture.

The festival was hosted in Abuja by First Surat Group of Companies, a Turkish multinational.

Participants from various states were brought together by the festival as they came to encourage unity in their diverse languages and cultures.

It attracted hundreds of persons who in utter agog were dazzled by the awesome unity being demonstrated by the participants of the event.

It was graced by wife of the president, Hajia Aisha Buhari, who gave the organisers of the festival a “message of love, peace and best wishes in all your plans to foster unity in this nation.”

Minister of Education, Malam Adamu Adamu also hailed the organisers, assuring them of his “readiness to synergise with your organisation to provide an enabling environment for the protection, promotion and preservation of our languages and cultures.”

The stage of this event sizzles as the participants from different states in their different ethnic groups sang and danced in their native languages, passing a message of love, peace and friendship to the world.

The event, which also took place in Washington DC, was marked by a message sent by US President Barack Obama to the IFLC, which underlined “the efforts to unite young people from across the globe.”

The message read: “The rich cultures and unique histories of our global society are brought to life through mesmerizing dance and captivating performance. In demonstrating the traditions that make your heritages special, festivals like this one allow us to bear witness to the ways hope and beauty stem from songs of inclusion.”