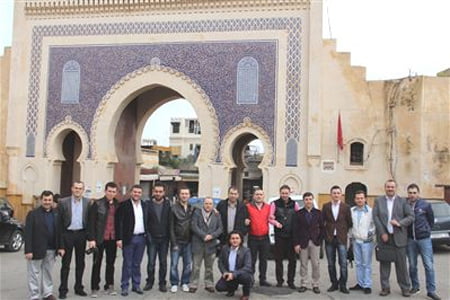 The KIAD (Kastamonu Businessmen Association) organized a business trip to Morocco and were greeted at Casablanca Airport with roses by the Moroccan businessmen. The Young KIAD members were delighted to receive such a greeting. They were in Morocco from December 11 – 14, visiting the cities of Casablanca, Fes, and Rabat and meetings with the members of the Turkish-Moroccan Businessmen Association.

Turkish businessmen also visited Mehmet Akif High School, one of the eleven Turkish schools in Morocco, where the students recited Turkish poems and songs for the Young KIAD members during their visit; they experienced emotional moments.

President of Young KIAD, Alkan Ayakatik said, “Turkey’s both cultural and commercial expansion into Africa, has especially strengthened the relationships of Turkish and Moroccan businessmen. With the help of TUSKON representatives, the Turkish-Moroccan Businessmen Association was established and since then has been involved in numerous projects. They maintain strong relationships with the office of the Prime Minister and other high-ranking officials. I was pleased to see that even Bureaucrats and politicians from Turkey trust in the Turkish-Moroccan Businessmen Association before beginning any ventures.  The Turkish schools in Morocco are home to teachers who speak the native tongue, alumni who speak Turkish, and students who go on with great knowledge of both countries; this plays an important role in the commercial relations between the two countries. Coming from Kastamonu, it was an emotional experience to see that Turkish schools in Morocco are part of a peace-building effort in Africa. I greatly thank all who contributed to the establishment of these schools.”

Vice President of Young KIAD, Murat Sancaktaroglu said that their meetings with the Moroccan businessmen were productive, especially the one-on-one meetings. “After concluding our meeting, we saw that Morocco was lacking in the textile industry, but new constructions have given this country a new dimension. We saw that the city of Rabat was especially successful in urban planning and development,” said Sancaktaroglu.

Furkan Kesercioglu, a member of Young KIAD explained that Turkey has made tremendous advances in commercial relations with Morocco. “There is potential for lucrative trade in the field of construction and construction materials,” said Kesercioglu. Firat Barut, the President of the Metal and Machinery Commission concluded that they decided to work on improving the water purification systems as a company.