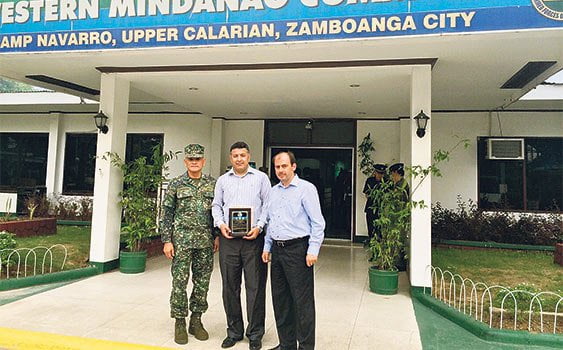 The award came after the Turkish high school in the Philippines gave support to people suffering from internal conflict in Mindanao, one of the islands of the Philippines, and provided 38,000 homeless people with humanitarian assistance.

The Armed Forces of the Philippines have recognized the Filipino-Turkish Tolerance School in Zamboanga for their contribution to peace in the region.

The award came after the Turkish high school in the Philippines gave support to people suffering from internal conflict in Mindanao, one of the islands of the Philippines, and provided 38,000 homeless people with humanitarian assistance. The aid was distributed to needy people by Kimse Yok Mu, the Turkish humanitarian charity that is affiliated with the Hizmet movement, in cooperation with the Turkish schools located in the region.

The military has stated that they did not want this help and initiative to go unrecognized.

Zafer Elen, the general director of the Tolerance Turkish School in the Philippines, has expressed his pleasure over the award.

“The award has been given for the important reason of contribution to peace, a move that once again indicates and confirms that the mission of the [Turkish] schools in this country is understood,” Elen said. He added that the Turkish schools in the Philippines will continue to play the role of a bridge between the two nations.

Elen mentioned that the award given by the military is not the first one that the Turkish schools in the Philippines have received. “In 2011 we were also awarded by a police department for our contribution to peace in the region. In 2012 the Tolerance Turkish School was presented with an award of peace envoy,” Elen said.