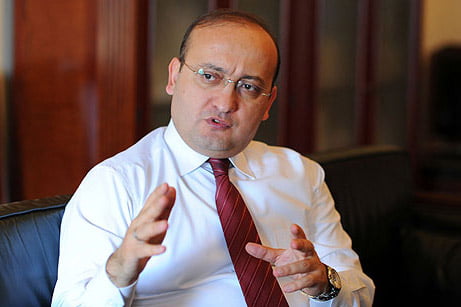 Professor Yalcin Akdogan, the chief political advisor  of Turkey’s Prime Minister Recep Tayyip Erdogan, wrote an article on the “Open View”,  the weekend edition of Turkish daily newspaper Star, titled “Did Ocalan change his view of religious movements?” Here is a translation of that article from Turkish:

In his latest meeting with his lawyers, Abdullah Ocalan, the leader of PKK terrorist organization, highlighted that he is not against disarmament in principal and he is the only person who could make it happen. He claimed a new role in the upcoming days; he, as always, made it sound like that solution is possible only through his own efforts. He strongly reacted against the statements made by Osman Baydemir in reference to closure of an era of armed battles was not because he disagreed with him but he thought that  Baydemir stole his role and mission of decision making. He was angry over losing an important card that could use.

Another striking point in his statements was where he comments on the Gulen Movement.  In regards to the meeting that took place between his lawyers and Huseyin Gulerce, a columnist at Zaman newspaper, he says “The government used some religious movements against us in the past. For instance, a conflict between PKK and Hizbullah was created. These sorts of problems can be resolved now.” This statement was interpreted as an olive branch extended to the Gulen Movement and a search for common grounds. Of course, we do not know what the subject of their meeting was or whom Gulerce was representing there. However, I believe that it would be a big mistake to think of this meeting as an official meeting between the PKK and the Gulen Movement.  I think neither Gulerce himself nor the members of the movement would be happy with such a perception. Ocalan’s lawyers had met with many writers, academics, and leaders of different movements before. I believe it would be quite wrong to see these meetings as a search for organizational ties as well as presenting them as such to the public.

In reference to the Gulen movement, Ocalan said “Its role is very important. I see this movement rather as a civic movement in Turkey and the Middle East. Like other civic movements, they can take part in democratization and enlightenment of the society without any political aspirations.” This approach actually seems quite different from his usual stand. That is, it is well known that PKK has always been intolerant towards any alternative “power” in the region.

PKK has seen them as a “threat” to its own existence and has tried to weaken their influence by all means. This is so whether it is a political party like Justice and Development Party which makes a political call, a spiritual movement like Gulen movement making a spiritual call or a NGO that makes a call for social change to people. PKK has been intolerant towards them all.

PKK has used everything in its power to suppress the emergence and thriving of any civic or political initiatives in the region. PKK has even killed some imams just because they did not take orders from PKK or spoke things that PKK did not approve. PKK’s intolerant understanding and oppressive approach contributed to the deepening, chronic Kurdish problem as much as the government’s policies to keep the status quo. On the Kurdish problem, no single person or organization with a different opinion or suggestion was granted the right to live. Any sort of formation was tried to be suppressed or terminated.

Ocalan in addition states that most of the problems will be overcome if the powers of the region can cooperate. “Everybody can work together in order to overcome the status quo in Turkey and to implement a road map for democracy. The common ground in these matters should be democracy.” says Ocalan. Indeed, these words of Ocalan should be analyzed well by both PKK supporters who have been terrorizing the region and the members of the BDP. It would be an important progress if such an ideology, which bombs party buildings and learning centers of the Gulen Movement and kills imams disagreeing with them, could come to terms with democracy and accept differences. PKK has been much irritated by the Gulen Movement’s activities that made it a strong player in the region. PKK sees any spiritual progress in the region as a threat to its existence and therefore tries to keep its grassroots as secular as possible. While PKK regards any religious activity favored by the people of the region as an obstacle to its organizational improvement, it takes it as a big threat when its own members start to come closer to such trends.

In disagreement to PKK, I do not believe that the Gulen Movement takes any organization or group as “enemy” or “competitor”. Social movements like this can only expand by adopting principles that do not create enemies, by being able to communicate with people of all levels, and open arms to everyone. Almost all ideologies around the globe has one common feature; creating an “enemy” or an “opposing” group. There is always an “opposing” movement or idea that prevents ideologies from reaching their goals. Therefore these opposite groups must be fought with and overcome. Fascist movements, for instance, see ethnic groups, immigrants and strangers as a problem and obstacle. The Gulen Movement cannot be classified as ideological structure. If a movement claims to address the hearts of people, they cannot be in a position to exclude, terminate, or target other groups. Because “winning the hearts”, first and foremost is an act geared towards dealing with “others” that are different than your own. Hence, religious movements are open to everyone from different levels of society by nature.

It is wrong and harmful to present Gulen Movement or create a picture that will make the Movement look as if it gets along and tries to collaborate with, or in need of help from PKK. I believe that Gulen movement will not fall into such a trap. They can play a vital role and do a major service to do people just like other NGOs in the region. The activities that will contribute to region’s social and cultural development, strengthening of its spiritual texture, consolidation of solidarity and brotherhood in the region shouldn’t be harmed by such manipulations.

Unfortunately we see that Ocalan is disturbed by the emergence of social initiatives more so than the political ones. He has been threatening the NGOs in the region and trying to weaken them by huddling them together under the name of Democratic Society Convention for a long time. We see Ocalan threatening and challenging one day, and being moderate and tolerant the other day. These zigzags suggest that his moves are all tactical rather than being the results of some principals. Despite all facts, it is still desirable that there is no more tension, polarization, and conflicts between the groups in the region.  All players in the region are responsible for nurturing a democratic environment where different opinions and groups can coexist.