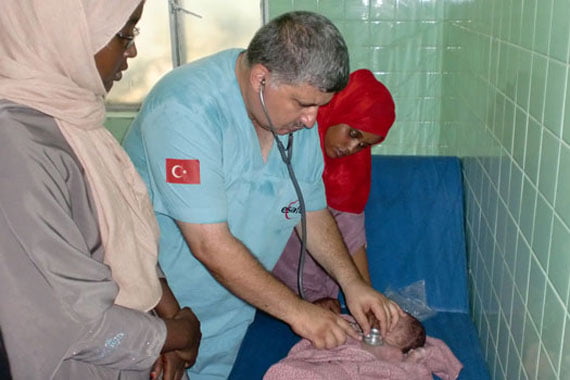 Doctor Lokman Cam, who had volunteered for three-month periods in Somalia

Doctor Lokman Cam, who had volunteered for three-month periods in Somalia over the past two years, eventually said: “They need us more” and moved to the country. Cam said his wife and three children at university showed the most support for his decision. Somalis, on the other hand, expressed their gratitude with the words: “You’ve come to us when everyone else was leaving.”

“I always dreamed about going to Africa during my school years. Tears shed for these lands were indescribably shattering my soul. So when I was offered a volunteer mission in Somalia, I felt on the top of the world.” These words belong to an ESAFED (Aegean International Health Federation) volunteer doctor, Lokman Cam, from Izmir. Cam, who had volunteered in many places that his colleagues wouldn’t even dare to go, recently decided to settle in his dream lands. Having volunteered for three-month missions in the region over the past two years, Cam says, “People there need us more” to tell the reason behind his decision. Somalis, who are glad by Cam’s decision to settle down while other foreigners are counting down the days to return their countries, expressed their gratitude with the words: “When everyone else is leaving us, you’ve come to stand by our side no matter what.” Cam says his wife and three children supported him most in his decision, which took even Somalis by surprise. His three children saw their father off wishing him well. Cam’s life story, from his hometown Anamur (A Mediterranean coastal city) to Somalia, is such an inspirational one.

Lokman Cam, who couldn’t afford university preparation books as they were financially struggling, was able to get into Erciyes University Medical School in 1982 by studying borrowed books. His senior roommate in Kayseri tells him they should go to countries in destitute and extend a hand to the sufferer. And looking at the future doctors in the face, he says “You will go to this country and you to that for service”. Africa falls to Cam’s share. Taken aback by such an assignment back then, Cam now says, “So many years have passed since then, but everything said have come true.”

After graduating in 1988 and getting into pediatrics in Konya nine years later by taking TUS (Medical Specialization Exam), Cam received job offers from private hospitals. However, he preferred working in Tunceli for quite a long time despite hard living conditions. What is behind his preference is Fethullah Gulen’s call: “Tell doctors go to Southeast.” “That being the case, I wouldn’t think only of myself. I knew how much it’s needed. So I filed my application without giving a second thought. I was appointed to Tunceli where I worked for a public hospital for two and a half years,” Cam related. He made hundreds of lasting friends but also kept thinking about African people during all this time. So he rejoiced at the offer for a volunteer position in Somalia. Because his prayer voiced 25 years ago was answered. So he went to Somalia for the first time in 2011.

We felt the misery so intensely in Somalia

Cam relates his first impressions of Somalia as follows: “We knew the misery the Muslim world was in but we felt it so intense in Somalia. Despair, famine, draught and terror were creating the greatest humanitarian plight there.” Cam commented Anatolian people are teaching a humanitarian lesson to nations of the world with the aid they’ve been providing for Somalia. He was able to pal up with the locals in a period of three months. And one day, he decided to live in Somalia for good, leaving everything behind. Receiving continuous support from his family, Cam is going to take along his wife and 12-year-old daughter as soon as possible. His university student children, 21-year-old daughter Selma and 19-year-old son Cihangir, will stay in Turkey, on the other hand.