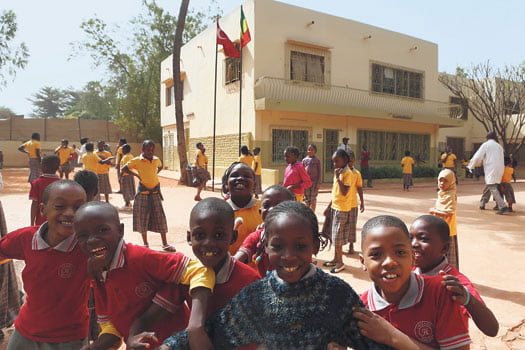 Malian Culture Minister Bruno Maiga has praised Turkish schools, saying only they amongst foreign schools did not leave Mali when a civil war broke out in the country, which has been fighting against rebels in a French-led offensive for four months.
The Malian minister spoke during an event held for the elimination round of the Turkish Olympiads over the weekend. The event was a sigh of relief for the conflict-stricken nation. The competitors were elected out of some 2,200 students from eight schools and took part this weekend in a round to decide who will participate in the Olympiads, held annually in Turkey.

The students displayed their performances — singing and reciting poems in Turkish — in front of a large crowd, which gave a standing ovation for each performance.

Addressing the audience during the event, Minister Maiga said: “We learn who our friends are in difficult times. The Turkish schools here showed what real kinship is by standing by us in our troubled days. While all foreigners were leaving the country, you stayed here and served the Malian people.” He said the Turkish teachers at the schools showed an exemplary form of self-sacrifice in staying in Mali despite the conflict.

Thirty-six students will take part in the Turkish Olympiads in Turkey this year. Twenty-two of these students will participate in the dancing category while the others will be vying for the top prize in the categories of song, poem, public speaking and special talent.

Malian Culture Minister Maiga highlighted the importance of such activities for intercultural dialogue and said, “The world needs international language and culture festivals more than ever.”