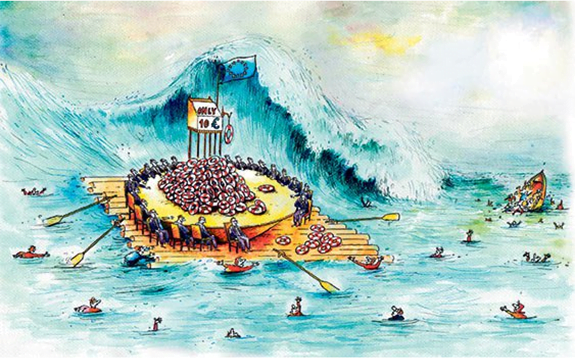 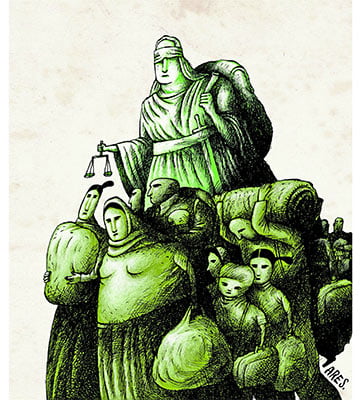 The “Refugees” competition was sponsored to raise awareness of the difficulties facing migrants who fled their homes to set out on dangerous journeys to Europe.

“We hereby invite all artists who want to draw attention to the refugee problem with their drawings to join our cartoon competition,” the announcement on the organization’s website states. 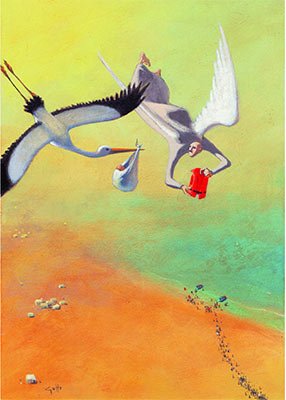 A number of cartoonists from around the world entered the competition, which saw a total of 1,250 cartoons submitted before its deadline on Jan. 29. Cartoons were evaluated by a jury made up of famous cartoonists such as the Zaman daily’s Cem Kızıltuğ, online news portal T24’s Tan Oral, Yeni Asya daily’s İbrahim Özdabak, Art of Humor Association (MİZAHDER) founding member Muammer Kotbaş and Belgian cartoonist Rudy Gyhesens — who runs the European Cartoon Center — on Feb. 4 at the Marmara office of Kimse Yok Mu.

The awards ceremony for the contest will be held on March 2, with $3,000, $2,000 and $1,000 in prize monies given to those who ranked first, second and third, respectively. Following an exhibition in İstanbul, the cartoons will be exhibited in Athens, Vienna, Munich, Paris and Brussels.

Highlighting that Kimse Yok Mu was among the first charity organizations in Turkey to help trying to solve the problems Syrian migrants face, Eyüboğlu said: “We have donated more than TL 70 million for Syrian migrants. And now we have organized an international cartoon contest to raise awareness of the difficulties they are facing through art. Although some European countries accept them politically, citizens of these European countries should also try to embrace them.”

Saying that Kimse Yok Mu aims to take steps towards solving migrants’ problems, Eyüboğlu added: “When Syrians first came to Turkey, they told us ‘We were so happy in our country. While we were going about our lives, shopping and attending weddings, etc., we woke up one morning only to find out that everything was falling apart. We weren’t expecting any of this.’ That’s what we want to emphasize in this contest. We all could be migrants at any given moment.”

Gyhesens said cartoons are more effective in expressing the reality of the migrant issue then news reports. In response to a question about a cartoon by the Charlie Hebdo magazine that pictured an adult version of Alan Kurdi — a 3-year-old Syrian Kurdish boy who washed up on the Turkish coast in September 2015 — chasing a woman, with the words “What would little Alan Kurdi have grown up to be? An ass groper in Germany,” written in it, Gyhesens said it made him and other citizens of Belgium very sad.

Stating that he was deeply affected by cartoons, Gyhesens’ fellow jury member Oral said: “Cartoons reflect both the human and legal sides of the [migrant] problem, reflecting the helplessness of people coming from the south as well as the uneasiness of Europeans.”

“I wasn’t expecting to see this many good works. It was very hard to decide the winner,” Özdabak, another jury member, said.

Emphasizing that he always wanted to do something about the migrant issue, Kızıltuğ added: “Cartoons were sent in from people across the world, with each one having an original perspective. We tried to choose ironic cartoons that would stick in one’s mind, make people ask questions and try to find the answers to them.”