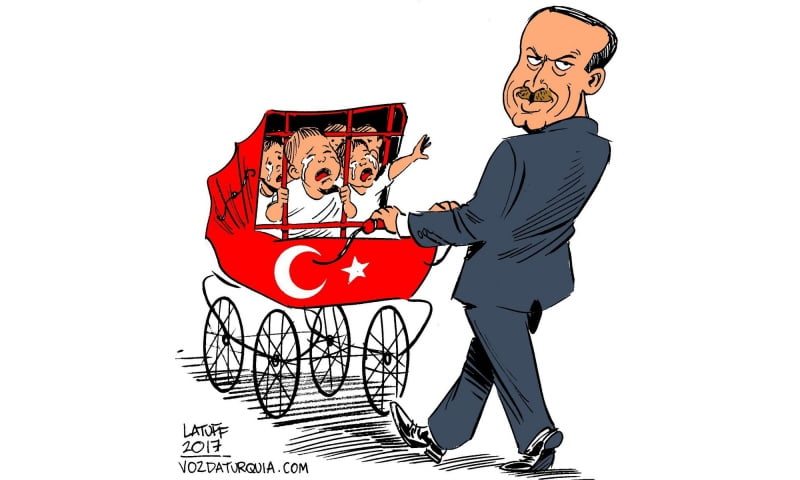 Turkish President Recep Tayyip Erdoğan is infamous for encouraging Turks to reproduce like wildfire, urging the diaspora in Europe to “have five children, not three” and telling women in the secular state that Islam ties them to the “duty” of motherhood.

He’s not so fond of babies with alleged coup conspiratorial ties.

Yes, Erdoğan’s paranoid purge of perceived political enemies has landed hundreds of babies and toddlers behind bars, sometimes arresting mothers on the very day they have given birth.

When will the world pay heed to the humanitarian crisis on Erdoğan’s home turf that engulfs more innocent people by the day, even crying babies?

Turkey’s Ministry of Justice told an inquiring opposition lawmaker last May that at least 560 children 6 years of age and under were being held in overcrowded prisons as authorities continue to round up perceived foes after the July 2016 coup attempt. Sometimes the mother has been arrested while pregnant; sometimes both parents were seized and there’s no one left in the family to care for the children. More than 100 incarcerated kids were infants under a year old.

Activists have been using the hashtags #668babies, or #668bebek, to reflect the mounting total of known tots behind bars.

In August 2016, Turkey cleared out 10 of thousands of inmates, some convicted of violent crimes, to make room for more political prisoners. An IRIN investigation released last September uncovered reports of torture, withholding water, lack of access to medical care and sexual abuse among the mistreatment; one woman who suffered internal bleeding after a beating was scheduled by prison officials to see a doctor two months later. To add insult to injury, everything used by a prisoner from water to medical care to maxi pads must be paid by the detainee.

One young mother sentenced for taking part in a protest was sent to prison with her six-month-old baby, shoved into a cell built for eight that housed two dozen women. Her sister told investigators that the mother struggled to get baby food and supplies behind bars, and was once dragged by her hair down a stairway for refusing to salute guards.

Erdoğan’s paranoid purge of perceived political enemies has landed hundreds of babies and toddlers behind bars, sometimes arresting mothers on the very day they have given birth.

It’s still six degrees of Fethullah Gülen in Turkey, where the regime will cook up any story to link detainees to the Pennsylvania cleric blamed for the coup. Just ask American hostages Pastor Andrew Brunson, who just passed the 500-day mark of captivity, and NASA Mars mission scientist Serkan Gölge, who was sentenced this month to 7.5 years on bogus charges.

As of the beginning of this month, more than 132,000 people have been detained and more than 64,000 have been arrested in Erdoğan’s purge. The human rights abuses are staggering; the world’s silence, deafening. Ali Osman Karahan, an eightysomething with one kidney who is suffering from late-stage prostate cancer, was detained for 15 months; document showed Karahan was subjected to 11 days in solitary confinement for simply encouraging other prisoners to have hope that they will someday be free.

And as the very old are treated horrendously, so are the very young.

Aysun Aydemir, an English teacher who had a Caesarean section on May 12, was taken into custody with her newborn three days later. Hatice Avan gave birth on June 22 and police swooped in to lock her in the hospital room with her baby before arresting them the next day. Teacher Fatma Özturk was reportedly handcuffed to her bed before being arrested hours after giving birth on July 9. Ayşe Kaya was hauled in for interrogation the same day she gave birth on July 25. When doctors have protested that new moms shouldn’t be discharged, police have hovered over their hospital rooms before making an arrest.

As opposition MP Sezgin Tanrıkulu, who has gathered and tweeted these stories and more, said of the arresting authorities, “Are these humans?”

When will the world pay heed to the humanitarian crisis on Erdoğan’s home turf that engulfs more innocent people by the day, even crying babies?

Bridget Johnson is a senior fellow with the news and public policy group Haym Salomon Center and D.C. bureau chief for PJ Media.

The Kimse Yok Mu charity will hand out 288,300 food packages to people in need as well as host iftars (dinners to break the daily fast) serving 1,168,000 people throughout Turkey and 103 other countries during the holy month of Ramadan. The month of Ramadan, commonly known in Turkey as the sultan of all the […]