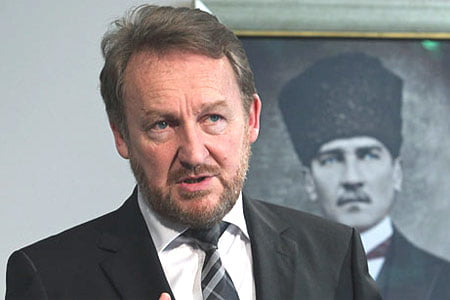 The Bosniak member of Bosnia and Herzegovina’s tripartite presidency, Bakir Izetbegovic, expressed his admiration for Turkish schools and universities abroad in an exclusive interview with Today’s Zaman on Monday. Izetbegovic noted that Turkish schools abroad are esteemed for the good education they provide. Turkish schools (aka Gulen inspired schools) have helped the country progress, said Izetbegovic.

International Burch University was established in Bosnia and Herzegovina’s capital Sarajevo in 2008 with the purpose of providing education in English at a modern university, and according to Izetbegovic it has done a great job of fulfilling the mission of Turkish schools. “The university provides a high standard of education. My wish is that such universities will be able to reach more people and become stronger. There are opportunities for these universities to find means to give education to more people,” added Izetbegovic.

Expressing his satisfaction with Turkey, which helped Bosnia and Herzegovina solve a number of the political problems it was facing, Izetbegovic said: “The success of Bosnia and Herzegovina depends on Turkey, which is a powerful country that is constantly progressing. The achievement of one brother is also the success of the other [brother]. Thus, we are proud of our brother Turkey.”

The Bosniak leader also touched upon the ongoing clashes in Syria. He criticized the world for being late in stopping the bloodshed in the country. “Bosnia and Herzegovina feels Syria’s sadness deeply. It is a big shame that the massacres in Syria are continuing. People still have not learned from the suffering in Bosnia and Herzegovina,” said Izetbegovic.

In July 1995, around 8,000 Muslims, mostly men and boys, captured after Bosnian Serb forces overran a United Nations-protected enclave, were massacred in the country.

A 28-year-old man of Turkish origin has been handed down a prison sentence of eight months and a fine of 23,000 euros by a French court after he attacked several institutions affiliated with the faith-based Gülen movement in the country. M.Y. admitted to have taken part in six other attacks against Gülen-affiliated education and culture centers in France.

“Once, a wolf drinking water from the river notices a lamb by the water and runs towards him. He is planning to eat up the lamb. But to block any likely help and to shift the blame onto the lamb by psychological pressure and thus eat it up comfortably, the wolf says, “Why did you […]