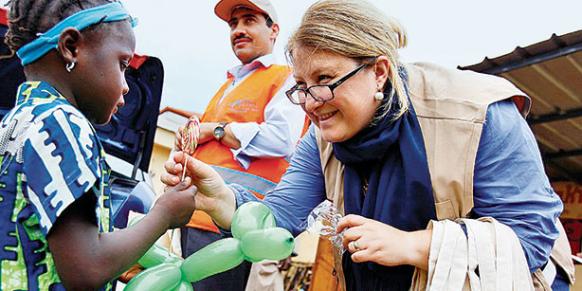 The Turkish charity Kimse Yok Mu held a large iftar in Conakry, the captial of the African country of Guinea, on Sunday.

The Turkish charity Kimse Yok Mu (Is Anybody There) has been providing aid to 3,000 families in the African country of Guinea during the holy month of Ramadan and has also been organizing iftars (fast-breaking dinners) in various parts of the country each evening.

A large iftar event was organized by the Kimse Yok Mu on Sunday evening in the capital, Conakry, for orphans from various parts of the country. Guinean Minister of Family and Social Affairs Camara Sanaba Kaba and various celebrities were among those attending the dinner.

Giving the opening speech at the event, Kimse Yok Mu Deputy Secretary-General Ülkü Atlamaz said that the charity has provided various types of aid to a total of 3,000 families across Guinea since the start of the Islamic holy month of Ramadan. He added that the charity also provides food to orphanages across the country.

Also speaking during the event, Guinean Minister Kaba expressed her gratitude to Kimse Yok Mu for providing aid to orphans and other people in need. Kaba said that the government is ready to cooperate with Kimse Yok Mu in any of its charity activities.