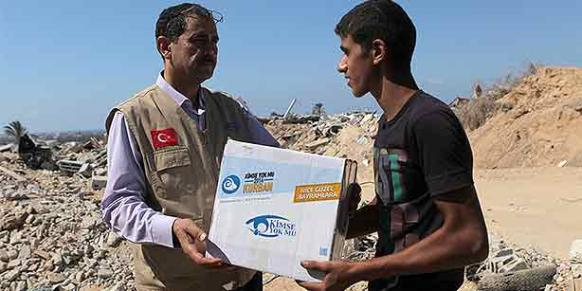 The Kimse Yok Mu charity organized a trip to Palestine along with 71 other countries during Eid al-Adha with its staff and volunteers to reach out to impoverished families and orphans. (Photo: Cihan)

The Turkish aid organization Kimse Yok Mu, which has become the latest target of the Justice and Development Party’s (AK Party) witch hunt, delivered aid in Palestine, including in Gaza, with approximately 100 volunteers from Turkey over the weekend.

The UN-affiliated Kimse Yok Mu charity organized a trip to Palestine along with 71 other countries during Eid al-Adha with its staff and volunteers to reach out to impoverished families and orphans.

The groups of volunteers delivered sacrificial meat paid for by donations from Turks in several Palestinian cities on Sunday. Following a delivery tour held before noon, the Palestinian authorities and the Zakat Foundation handed Kimse Yok Mu an award to recognize its work, in a ceremony held at the Dura Youth Sport Club on Sunday afternoon.

Officials from the Ministry of Foundations of Palestine thanked the Jerusalem representative of Kimse Yok Mu, Harun Tokak, for his organization’s solidarity with the people of Palestine and the helping hand it has extended.

In his speech, Tokak spoke about the birth of Kimse Yok Mu in the aftermath of a massive earthquake in Turkey in August 1999 and said that the association’s name was inspired by the cry of the people under the rubble: Is anybody there?

Noting the religious and humanitarian significance of sacrificing animals on Eid al-Adha, Tokak said they are sacrificing so that Ishmaels are not sacrificed. “Sacrificing means getting closer to God,” Tokak said.

Speaking about the goals of Kimse Yok Mu in Palestine, Tokak said they would like to open schools to raise good generations. For the time being, Kimse Yok Mu has pioneered the opening of a Turkish Culture and Language Center in Jerusalem next to an orphanage. While many orphans are supported financially, the center also offers free Turkish lessons to students.

Although Kimse Yok Mu delivers immediate help to poor families in not only Palestine but around the world, their aim is to go beyond mere band aids. Kimse Yok Mu believes that only through education can the children and youth be saved.

During Eid al-Adha, Kimse Yok Mu went to the homes of Palestinian families to find out in what areas they need help. While many suffered from unemployment, others could not provide for their families due to protracted illness.

Kimse Yok Mu volunteers were divided into small groups to reach more households. A group delivering meat and gifts for children in the West Bank first visited a family in which the father had recently died of cancer. The grandmother of the five children who were left behind says they have no income. “God is our only helper,” she told Today’s Zaman. When Kimse Yok Mu visited the poverty-stricken house on Sunday, the mother was at the hospital with one of her handicapped children. Despite the visible poverty, the relatives who live next door tried to offer the volunteers some refreshments.

A second household was a very crowded one, with 15 members, three of whom are handicapped. Their only source of income comes from the father, who is a construction worker but who can only find temporary jobs.

The group, led by Kimse Yok Mu executive Ülkü Atlamaz, took notes on the needs of the people to monitor their situation after Eid as well. Atlamaz said Kimse Yok Mu keeps an inventory of each beneficiary of aid and help them especially if there is an urgent need for medical help. A household with six children was one such example. The mother of the family is bound to a wheelchair. Although her 16-year-old daughter looks after her as much as she can, her uncle says an assistant is necessary so that his niece can continue her education.

A woman with four boys says Kimse Yok Mu is the only visitors they had during Eid. Since her husband abandoned the family they have had no source of income. The boys smile shyly upon receiving candy brought by Kimse Yok Mu from Turkey. Kimse Yok Mu officials promised to visit them again. Atlamaz says it is very important to follow up each case in order to meet people’s expectations.

A volunteer from İstanbul, Yavuz Girdap said he has been participating in aid missions with Kimse Yok Mu for the last few years and will continue to do so.